Law360, New York (April 10, 2014, 3:11 PM ET) — A top banking industry group said Thursday that the largest, globally significant financial institutions do not have a significant funding advantage, in a study that seeks to refute claims that such banks receive a subsidy from governments that will not let them fail.

Deutsche Bank AG has won dismissal of a lawsuit seeking to have it cover government-sponsored Freddie Mac’s losses on defective mortgage securities purchased from a more than $1.4 billion trust.

The German bank was accused by the Federal Housing Finance Agency, which oversees Freddie Mac, of misrepresenting the underwriting and quality of home loans backing the securities in the trust, which dated from 2006.

Freddie Mac bought nearly one-third of the securities, which lost much of their value amid the U.S. housing and financial crises.

The lawsuit is barred by New York state’s six-year statute of limitations, Justice Eileen Bransten ruled in a filing Wednesday in State Supreme Court in Manhattan.

The dismissal came after a New York appeals court ruling in December that the clock on the statute of limitations began to run when the transaction was executed in 2006.

White House Said to Consider Community Bankers for Fed’s Board

White House Said to Consider Community Bankers for Fed’s Board

The White House is considering two community bankers to fill an open seat on the Federal Reserve’s Board of Governors, according to two people with knowledge of the process.

NEW YORK (MarketWatch) — J.P. Morgan Chase & Co. JPM +0.05% CEO Jamie Dimon’s pay fell to $11.8 million in 2013, compared with $18.7 million the year before, according to a Securities and Exchanges Commission filing on Wednesday. The CEO received a base annual salary of $1.5 million, stock awards valued at $10 million, and other compensation, according to SEC methodology. Dimon’s pay was cut by the firm’s board after the massive London Whale losses that cost the firm more than $6 billion. The firm’s CFO Marianne Lake earned $8.23 million last year, which includes $730,000, as well as a $1.3 million bonus and more than $4 million in stocks awards and options. Former co-CEO of the investment bank who recently left the firm, Michael J. Cavanagh, earned $16.2 million in 2013.

Posted on April 10, 2014 | Leave a comment
View this document on Scribd 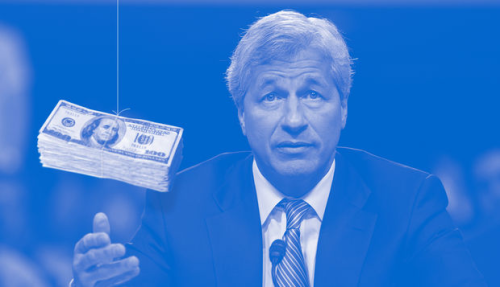 Jamie Dimon, CEO of JPMorgan Chase & Co, said that settling the big bank’s wide-ranging legal cases with multiple government agencies last year was “the most painful, difficult and nerve-wracking experience that I have ever dealt with professionally.”
In a 30-page annual letter to shareholders released by the company on Wednesday, Dimon made the comment as he took another step toward putting behind him the issues that cost the company more than $20 billion.

“We thought the best option, perhaps the only sensible option,” Dimon wrote, “was to acknowledge our issues and settle as much as we could all at once, albeit at a high price.”

But Dimon, 58, appeared to bite his tongue from sharing any further thoughts on how the company was targeted by prosecutors. “There is much to say and a lot to be learned in analyzing what happened, but I am not going to do so in this letter — more distance and perspective are required.”

Dimon also provided more details on the $2 billion of additional annual spending by the company to comply with new rules and regulations.

Yes, the SEC was colluding with banks on CDO prosecutions

Yes, the SEC was colluding with banks on CDO prosecutions

Back in 2011, I asked whether the SEC was colluding with banks on CDO prosecutions. And now, thanks to an American Lawyer Freedom of Information Request, we have the answer: yes, they were.

This comes as little surprise: it beggared belief, after all, that every bank would end up being prosecuted for one and only one CDO. But now we have chapter and verse: the key precedent, it seems, was the first one, Goldman Sachs.

The SEC filed its case against Goldman and Tourre on April 16, 2010. Three days later Goldman reached out with a $500 million settlement offer, according to an email that Reisner sent Khuzami. Although that proposal was close to the final payment, it took another three months to announce a settlement. As Khuzami described to Kotz, Goldman wanted a global settlement that resolved not just the Abacus investigation but the SEC’s probes into roughly a dozen other Goldman CDOs.

Khuzami didn’t want to give Goldman that public victory. When the SEC and Goldman announced on July 16, 2010, that the investment bank would settle the Abac­us case for $550 million, the SEC said in a press release that the settlement “does not settle any other past, current or future SEC investigations against the firm.”

Khuzami was determined that Goldman’s payment only be linked to ABACUS. “This was not a $550 million settlement for 11 cases,” Khuzami told Kotz. “We may tell Goldman that we are concluding our investigations in these other matters without recommending charges, but that doesn’t mean we’re settling them. And that was an important point for us, because we didn’t want them out there saying, you know, they settled 12 CDO investigations for an average of $30 million each, and, you know, didn’t [Goldman] get a great deal.”

Yet in its statement on the Abacus settlement at the time, Goldman said that the SEC had concluded a review of other CDOs and did not anticipate recommending claims for now.