Because This Time Is Never Different, In 100 Year Old Cartoons 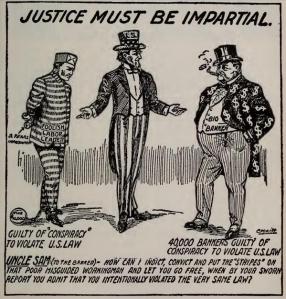 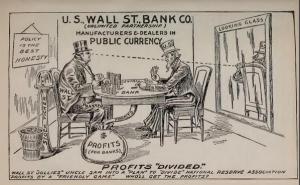 This is a Sept 25, 2014, Washington State supreme court ruling on REMIC taxes not exempt because Cashmere did not receive any interest in mortgages or deeds of trust to back its investment.

Michael Gamsky testified that REMIC investments are not secured transactions because issuers do not pledge any property as security for the investments. He explained that investors who purchase REMIC certificates are beneficiaries of a trust and they have contractual rights under the pooling and servicing agreement, but they are not secured investors.

After reviewing the evidence, the superior court granted summary judgment to DOR. The Court of Appeals affirmed, holding that Cashmere’s investments were not primarily secured by first mortgages or deeds of trust because Cashmere had no power to institute foreclosure proceedings. Cashmere Valley Bank, 175 Wn. App. at 418. Thus, the bank’s investments were not secured and the deduction did not apply. /d. at 418-19. Cashmere petitioned for review, and the Washington Bankers Association filed an amicus curiae memorandum in support of review. We granted review. 179 Wn.2d 1008, 316 P.3d 494 (2014).

“A recent rise in scheduled foreclosure auctions in many markets across the country shows lenders are continuing to clean house of lingering delinquent loans,” said Daren Blomquist, vice president at RealtyTrac.

So what’s the best strategy to help people keep their homes?

The housing crisis was so deep and troubling that we need to be open to helping homeowners in various ways. Even then, many people, still struggling to bring in enough income, may have to let their homes be foreclosed upon. Others in better situations may best be served by getting a loan modification. In some cases, it might be necessary to reduce people’s principals, bringing their mortgages in line with current market prices.

And then there’s the innovative solution that helped Shepard save her home. She was one of the first homeowners in Maryland to be rescued from foreclosure through the Boston Community Capital Stabilizing Urban Neighborhoods Initiative, known as SUN. It’s an amazing program that specifically targets folks such as Shepard who are back on their feet financially and can afford to stay in their homes if the price is right.

Under the program, the nonprofit organization negotiates with the homeowner’s lender to purchase the home at the current market value. The group then sells the home to the existing homeowner with a more affordable fixed-rate, 30-year mortgage. To qualify for the program, the home has to be in foreclosure or about to be in foreclosure or the homeowners have to be awaiting eviction because of a foreclosure. You have to have a steady income that can support a mortgage. There is no fee to apply.

The program began in Massachusetts but has expanded to Maryland and Rhode Island. It should be in more states. So far, more than 500 families facing foreclosure have been able to reduce their monthly mortgage payments and principal balances by average of 38 percent.

LOL! What a joke! You mean steal from his country…

Former American International Group Inc. (AIG) Chief Executive OfficerEdward Liddy defended his role as the government-tapped leader of the company at the time of a 2008 bailout, saying he took the job to help his country and protect shareholders.

Without taking an $85 billion loan from the Federal Reserve Bank of New York at steep terms, which now face a legal challenge from then-largest AIG shareholder Maurice “Hank” Greenberg’s Starr International Co., the insurer would have wound up in bankruptcy and stockholders “would have been wiped out,” Liddy told a government lawyer today in Washington federal court.

Law360, Los Angeles (October 17, 2014, 9:14 PM ET) — The Second Circuit on Thursday declined to grant a panel or en banc rehearing of its decision to toss an investor class action alleging Deutsche Bank AG lied about its $27 billion exposure to risky mortgage assets during the financial crisis.

A three-judge appellate panel in July refused to revive the action, finding that the bank’s estimation of its position was a matter of opinion. It held that the plaintiff investors failed to establish that statements from the bank about its exposure to risky residential mortgage-backed…

(Reuters) – Unable to reach a compromise with JPMorgan Chase & Co over the use of the term “smart” in relation to its lucrative retirement savings products, major life insurance provider MassMutual is taking the banking company to court.

MassMutual said discussions on Friday over its RetireSmart brand and the bank’s SmartRetirement trademark had failed, prompting it to immediately file a lawsuit in Massachusetts federal court.

The insurer is asking for a declaration that it is not infringing on JPMorgan’s trademark.

MassMutual, formally known as Massachusetts Mutual Life Insurance Co, is owned by policyholders and manages $147 billion in assets in its retirement business. It has used the brand RetireSmart for its mutual fund and retirement planning services for eight years, the lawsuit said. The company also has a website under the same mark.

JPMorgan first told MassMutual it was infringing the bank’s trademark last May. The two sides engaged in discussions over the summer, according to the court filing, and a coexistence agreement was drafted, but it ultimately failed.