A year ago, Mother Jones reported that a House bill that would allow banks like Citigroup to do more high-risk trading with taxpayer-backed money was written almost entirely by Citigroup lobbyists. The bill passed the House in October 2013, but the Senate never voted on it. For months, it was all but dead. Yet on Tuesday night, the Citi-written bill resurfaced. Lawmakers snuck the measure into a massive 11th-hour government funding bill that congressional leaders negotiated in the hopes of averting a government shutdown. President Barack Obama is expected to sign the legislation.

“This is outrageous,” says Marcus Stanley, the financial policy director at the advocacy group Americans for Financial Reform. “This is to benefit big banks, bottom line.”

As I reported last year, the bill eviscerates a section of the 2010 Dodd-Frank financial reform act called the “push-out rule”:

Banks hate the push-out rule…because this provision will forbid them from trading certain derivatives (which are complicated financial instruments with values derived from underlying variables, such as crop prices or interest rates). Under this rule, banks will have to move these risky trades into separate non-bank affiliates that aren’t insured by the Federal Deposit Insurance Corporation (FDIC) and are less likely to receive government bailouts. The bill would smother the push-out rule in its crib by permitting banks to use government-insured deposits to bet on a wider range of these risky derivatives.

The Citi-drafted legislation will benefit five of the largest banks in the country—Citigroup, JPMorgan Chase, Goldman Sachs, Bank of America, and Wells Fargo. These financial institutions control more than 90 percent of the $700 trillion derivatives market. If this measure becomes law, these banks will be able to use FDIC-insured money to bet on nearly anything they want. And if there’s another economic downturn, they can count on a taxpayer bailout of their derivatives trading business.

In May 2013, the New York Times reported that Citigroup’s proposed language was reflected in more than 70 lines of the House financial services committee’s 85-line bill. Mother Jones was the first to publish the document showing that Citigroup lobbyists had drafted most of the legislation. Here is a side-by-side of a key section of the House bill:

The London-based HSBC head of foreign exchange trading for Europe, the Middle East and Africa has been sacked.

Stuart Scott was dismissed from his role on Tuesday, according to sources. HSBC declined to comment.

The dismissal comes in the wake of the investigations launched by authorities on both sides of the Atlantic.

Michael Corbat is going to have to pay up.

Citigroup, which shelled out $7 billion to settle mortgage-related claims this year, will take a $2.7 billion charge in the fourth quarter related to legal expenses tied to settling charges it rigged currency and interest rates.

The surprise charge — expected to wipe out most of Citi’s quarterly profit — was dropped on shareholders Tuesday by CEO Corbat.

HSBC: Merry Christmas! But We Can Still Repossess Your Home

Wow!, now this is one bank that deserves a lump of coal by Santa and no bailout money from the U.S.!

HSBC’s Christmas cheer this year includes a Scrooge-like reminder of its power to repossess homes.

A sign posted in a branch location in central London thanked the more than 100,000 customers who “trusted us with your mortgages this year.” In slightly smaller font beneath the message, a warning reads: “Your home may be repossessed if you do not keep up repayments of your mortgage.”

James Ball, an editor at The Guardian newspaper, tweeted a photo of the sign, which also imparts a jolly “Season’s greetings” from the bank. 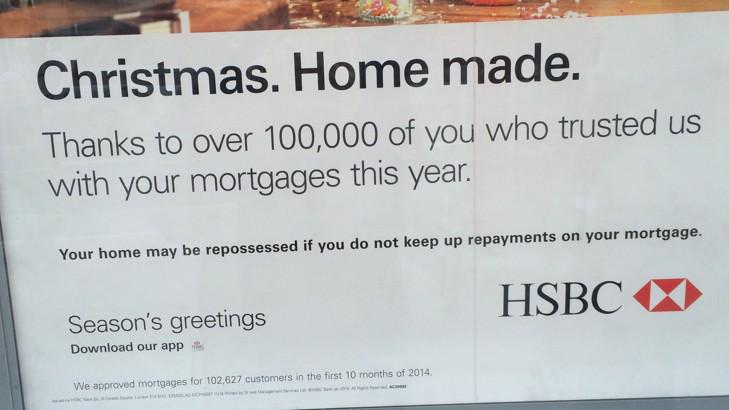 Merry Christmas! Pay us or we’ll take your home!

Level Global Investors LP co-founder Anthony Chiasson and ex-Diamondback Capital Management LLC portfolio manager Todd Newman argued their convictions should beoverturned because jurors weren’t required to find they knew the source of their illegal tip received some benefit in exchange, an essential element in proving insider trading. The investigations led to the shuttering of the two hedge funds.

The government said jurors only needed to find the men knew the tip was material nonpublic information, and that the tipper was breaching a fiduciary duty by revealing it.

In a 28-page decision (below) that could rewrite the course of insider trading law, sharply curtailing its boundaries, the United States Court of Appeals for the Second Circuit in Manhattan tossed out the case against two former hedge fund traders, Todd Newman and Anthony Chiasson. Citing the trial judge’s “erroneous” instruction to jurors, the court not only overturned the convictions but threw out the cases altogether.

“We conclude that the jury instructions were erroneous and that there was insufficient evidence to support the convictions,” a three-judge panel wrote.

In a statement, Mr. Chiasson’s lawyer applauded the decision and its wider consequences.

“Today’s decision is a resounding victory for the rule of law and for Anthony Chiasson personally,” the lawyer, Gregory Morvillo, said. “He is deeply gratified that the decision issued today unequivocally re-establishes his innocence under the law – consistent with what Anthony has steadfastly maintained for the duration of this ordeal.”

Mr. Steinberg’s lawyer, Barry Berke, predicted a similar outcome for his client. “The Second Circuit’s decision clearly means that Michael Steinberg is innocent of any crime and his conviction will be vacated as well,” Mr. Berke said. “It sends a loud and clear message that the government will be rebuked when it tries to turn innocent conduct into a crime, as it did in the case of Mr. Steinberg.”

The Federal Reserve Board issued a proposal Tuesday detailing how it will charge the biggest banks more in capital, while saying it would keep exact figures secret. Still, a Fed governor revealed that JPMorgan Chase is the only institution that will need to raise capital if the plan is finalized in its current form.

TRENTON – Homes damaged by Superstorm Sandy couldn’t be foreclosed on for three years if a plan endorsed Monday by a Senate committee becomes law.

The financial breathing room faces more hurdles in Trenton before it could take effect, but the impact would stretch into 2018 if it’s ultimately enacted.

The bill, S2577, was advanced unanimously by the Senate Community and Urban Affairs Committee, though Sen. Jennifer Beck, R-Monmouth, raised questions about including second homes and possibly delaying local redevelopment.

“We have so many in this state that don’t even have one home, let alone two homes, and so a benefit that we’re providing should really be for the place in which a family is raising their kids and sheltering themselves and that the second home is in many ways a vacation house or a luxury house,” said Beck, who noted federally funded recovery programs have been limited to primary residences.