Susan Rick’s boyfriend won $250,000 from the Illinois Lottery in July.

As the Chicago Tribune reported in August, Rick thought the winnings would allow her to “stop working seven days a week, maybe fix up the house and take a trip to Minnesota to visit her daughter.”

Instead of real money, Rick’s boyfriend – one Danny Chasteen – got an IOU from the state.

The problem: the state’s inability to pass a budget even after hiring (and subsequently firing) budget “guru” and Laffer disciple Donna Arduin for $30,000 a month meant that any Illinoisan who won more than $25,000 couldn’t immediately be paid.

The cash-strapped state of Illinois announced Wednesday they’ll be handing out IOUs for the time-being to any state lottery winner who wins more than $600.

Lottery to issue checks,” the Illinois Lottery said in a statement. “Please note that the funding to pay winners exists, but the legal authority to issue checks does not.”

The lottery said the payments will be made once a state budget is passed.

The lottery has been delaying payments to big winners since the current fiscal year started on July 1. Initially, only winners who were set to get $25,000 or more were receiving IOUs.

On Wednesday, the Illinois Lottery lowered the threshold to $600.

One Texas lawyer is helping companies opt out of workers’ compensation and write their own rules. What does it mean for injured workers?

STANDING BEFORE A GIANT MAP in his Dallas office, Bill Minick doesn’t seem like anyone’s idea of a bomb thrower. But backed by some of the biggest names in corporate America, this mild-mannered son of an evangelist is plotting a revolution in how companies take care of injured workers.

His idea: Let them opt out of state workers’ compensation laws — and write their own rules.

Minick swept his hand past pushpins marking the headquarters of Walmart, McDonald’s and dozens of his other well-known clients, and hailed his plan as not only cheaper for employers, but better for workers too.

“We’re talking about reengineering one of the pillars of social justice that has not seen significant innovation in 100 years,” Minick said.

How many times have we heard corporate-funded conservatives and “centrists” whine about “deficits” and demand cuts in the things government does to make people’s lives better? How many times?

“We’re broke.” “Taxpayers can’t afford these … (pensions, health programs, infrastructure repair, food stamps, high-speed rail systems, scientific studies, you name it).” Over and over we are subjected to demands that our own government cut back on the things it does — teachers and schools, roads, food programs, dams, bridges, scientific research, health care (but never, ever on military corporate contracts).

This “deficits” drumbeat is incessant because it is so well funded with corporate cash.

What would you say if you learned that the same corporations funding this corporate-conservative anti-government “deficit” propaganda actually owed the government more than $600 billion (billion with a ‘B’), and another $90 billion each year?

Last week, Citizens for Tax Justice (CTJ) and the U.S. PIRG Education Fund released an important report showing how Fortune 500 companies use tax-haven subsidiaries to keep$2.1 trillion out of the country to dodge up to $620 billion in U.S. taxes. These are profits already on the books, so the taxes are due – except for a “deferral” loophole that was quietly inserted into the tax code in the 1986 tax “reform” law.

The CTJ/PIRG report is titled, “Offshore Shell Games.” (Read the whole thing if you can, skim it if you can’t.) From the Executive Summary:

Congress, by failing to take action to end this tax avoidance, forces ordinary Americans to make up the difference. Every dollar in taxes that corporations avoid by using tax havens must be balanced by higher taxes on individuals, cuts to public investments and public services, or increased federal debt.

The U.S. Court of Appeals for the Ninth Circuit recently reversed the dismissal of a class action that was removed to federal court under the federal Class Action Fairness Act (CAFA).  In so ruling, the Court held that the case fit the narrow “local controversy exception” to CAFA’s grant of federal court jurisdiction.

The trial court found it had jurisdiction over a class removed from state court under CAFA.  Then, the trial court dismissed the suit for failure to state a claim.  However, the Appellate Court focused its analysis on the jurisdictional question alone and reversed on that basis alone.

The putative class consisted of Nevada borrowers who took out loans against Nevada real property.  Later, those borrowers defaulted, and the six defendants initiated non-judicial foreclosures.  The borrowers alleged the defendants engaged in illegal debt collection activity in connection with those foreclosures.

Before turning to the Appellate Court’s analysis, a discussion of is necessary.

The Sixers’ spat with their arena sponsor, Wells Fargo, is on full display on the court

The Sixers still have beef with Wells Fargo. The bank owns the naming rights to Philadelphia’s home arena, but isn’t a sponsor of the team. So as far as the Sixers are concerned, they don’t have to give Wells Fargo any free publicity.

The team doesn’t use Wells Fargo anywhere its press releases, but they took the disdain to a whole new level when redesigning the court for this season.

OK, so how does it look now? 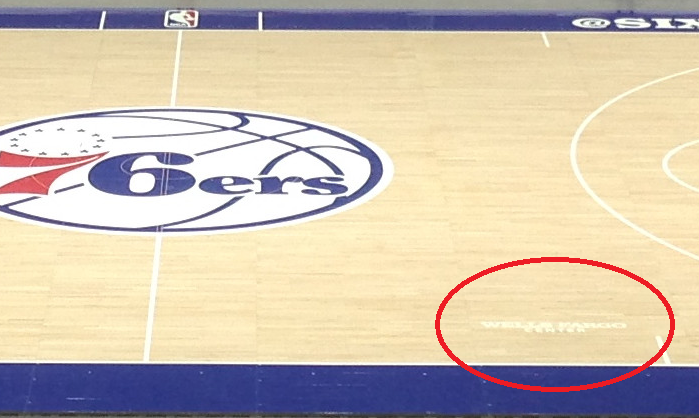 First, as a mere contractor, Snowden was not covered by whistleblower protections.

Second: he did in fact try going through established channels, but as expected, nobody cared.

The third point is perhaps most important. To illustrate it we use the example of Darrell Whitman who worked as a San Francisco-based investigator for the Whistleblower Protection Program – the very Federal agency tasked with offering protection to whistleblowers – when he went public with claims that the agency failed to defend workers who faced retaliation for reporting illegal activity and public safety concerns.

In an interview with NBC Bay Area earlier this year, Whitman said he tried to warn OSHA leaders that his managers pressured investigators to close complaints without proper review to clear a backlog of cases.

Whitman said his supervisor altered his reports by changing his conclusions and dismissed cases even when Whitman found they had merit.

It didn’t stop there: Whitman wrote letters to OSHA leadership and to the U.S. Secretary of Labor, Thomas Perez. “I had gone through every conceivable channel and what I saw was inaction,” Whitman said.

In the end Whitman told NBC Bay Area that he was fired as retaliation for raising red flags about the agency.

“They got rid of the squeaky wheel,” Whitman said. “I was going to report what I thought to be violations of law and policy. They were going to have to answer to those reports and they didn’t like that.”

The letter announcing his termination said Whitman had been fired for six separate reasons, including “lack of candor during an investigatory meeting” and “unauthorized release of government documents.”

Whitman said the “real reason” he was fired is because he took his concerns public.

The Consumer Financial Protection Bureau finalized a rule to improve information reported about the residential mortgage market. A copy of all 800-plus pages of that bad boy can be found here.

The rule will shed more light on consumers’ access to mortgage credit by updating the reporting requirements of the Home Mortgage Disclosure Act regulation. The bureau is working with other federal agencies to streamline the reporting process for financial institutions.

“The Home Mortgage Disclosure Act helps financial regulators, the public, housing officials, and even the industry itself keep a watchful eye on emerging trends and problem areas in the nation’s mortgage market – the largest consumer financial market in the world,” said CFPB Director Richard Cordray. “With today’s final rule we are shedding more light to foster better understanding of the market, and also ensuring that lenders have sufficient time to come into compliance.”

HMDA, which was originally enacted in 1975, requires many lenders to report information about the home loans for which they receive applications or that they originate or purchase. The public and regulators can use the information to monitor whether financial institutions are serving the housing needs of their communities, to assist in distributing public-sector investment so as to attract private investment to areas where it is needed, and to identify possible discriminatory lending patterns.

I am highly disappointed at the DOJ as this scandal is deja vu for me. DOJ has not changed or approved since the last scandal in the OJJDP (Office of Juvenile Justice and Delinquency Prevention) section in the DOJ in 2008.

USDOJ NIJ Director Nancy Rodriguez is being investigated for not following scores and rankings of grants.These are $75 million in school safety research grants. U.S. Senator Chuck Grassley wrote a letter to the DOJ:

You can read the internal scores and rankings:

Fact Check: Did Glass-Steagall Cause The 2008 Financial Crisis?

aking on Wall Street makes for good politics in the Democratic Party. And several of the candidates at Tuesday night’s debate had tough words about big banks. That was particularly true of former Maryland Gov. Martin O’Malley and Vermont Sen. Bernie Sanders.

Although he didn’t say so directly, O’Malley suggested several times that consolidation in the banking business was a big factor in the 2008 financial crash and that the U.S. economy remains vulnerable because of it.

His solution: Bring back Glass-Steagall, the Depression-era law that barred commercial banks from engaging in investment banking that was scaled back in the Clinton administration. We decided to look at O’Malley’s claim about the risks of bank consolidation.

How much bigger have the largest banks gotten, what did Glass-Steagall have to do with it and, most important, did the scaling back of Glass-Steagall lead to the 2008 financial collapse?

Despite what O’Malley and many other people believe, Glass-Steagall was not technically repealed in 1999, but it was effectively neutered. Legislation was passed that year that allowed bank holding companies to engage in previously forbidden commercial activities, such as insurance and investment banking.

The change in the law opened the floodgates for giant mergers, such as the $33 billion deal between J.P. Morgan and Chase Manhattan in September of 2000. During the darkest days of the financial crisis, Bank of America acquired two troubled financial companies — Countrywide Financial Services and Merrill Lynch, deals that wouldn’t have been possible before 1999.

The biggest banks are a lot bigger than they once were, mostly because of mergers and acquisitions. What’s not in dispute is that changes to Glass-Steagall allowed the biggest banks to grow bigger, which has raised new concerns about risks to the financial system.

At issue is the “too big to fail” problem: Will the federal government once again be forced to come to the aid of federally insured megabanks that have taken outsize risks with their money?

Since 2008, regulatory changes in the U.S. and abroad have supposedly mitigated that danger. The Dodd-Frank financial overhaul bill contains complicated provisions that would allow regulators to step in and take over failing banks, if necessary.

But there’s plenty of skepticism that the changes have gone far enough.

Presidential candidate and former Rhode Island Gov. Lincoln Chafee struggled to explain during Tuesday’s Democratic debate why he voted in favor of deregulating big banks in 1999.

CNN host and debate moderator Anderson Cooper asked Chafee how he could press Hillary Clinton on Wall Street when he voted for a bill repealing the Glass-Steagall Act, a landmark financial regulation bill that separated the banking industry from the securities industry.

Chafee was appointed to the U.S. Senate seat held by his father, John Chafee, until his death in 1999.

Cooper continued to press Chafee, asking if he didn’t understand the bill before voting on it.

“I think you’re being a little rough,” Chafee replied.

On a side note : The final vote of the Glass-Steagall Act came on Nov. 4, 1999, the same day Chafee was sworn in as Rhode Island’s senator. He filled the seat vacated by the death of his father, John Chafee, on Oct. 24, 1999.