A group of 11 banks agreed to pay more than $63 million to settle allegations that they misled the Commonwealth of Virginia and its retirement system about residential mortgage backed-securities, Attorney General Mark R. Herring said on Friday.

The banks, which include two Bank of America Corp units, Morgan Stanley and a unit of the Royal Bank of Scotland Group PLC, defrauded the state’s retirement fund by selling it shoddy mortgage bonds in the run-up to the financial crisis, Virginia’s attorney general said in a 2014 lawsuit.

None of banks admitted liability in the settlement, Herring said.

The $63 million pact is the largest non-health care-related sum ever obtained in a suit brought under a Virginia law aimed at curbing fraud against the commonwealth’s taxpayers, Herring said in a statement.

At least six banks targeted in Switzerland’s investigation into Libor-rigging are in settlement talks with the country’s competition regulator, according to two people familiar with the negotiations, as the four-year probe moves closer to wrapping up.

Comco, as the Swiss Competition Commission is known locally, is trying to reach a so-called “accord amiable” with the banks as it aims to complete the probe by July, one of the people said. They asked not to be identified because the negotiations are continuing.

A settlement in Switzerland would mean nearly all global investigations into rate-rigging are drawing to a close, about four years after the first fines were levied by U.S. and U.K. regulators. While banks face a smaller European Union probe, they have already been forced to pay about $9 billion for manipulating benchmark interest rates. Comco is moving into the final phase of an investigation opened in 2012 into “potential unlawful agreements” among a dozen banks, including Credit Suisse Group AG, UBS Group AG, Royal Bank of Scotland Group Plc, HSBC Holdings Plc and Deutsche Bank AG.

“Somebody needs to go to jail for this, man” Redacted emails released Wednesday by Michigan Gov. Rick Snyder show that his administration was informed of problems with Flint’s water almost a year ago, many months before the embattled governor or his staff begrudgingly admitted to bearing any responsibility for poisoning a city – or for fixing the problem. “They’re poisoning an entire community. A generation of kids will never recover from this. And it’s all just to save a few dollars. They played a game of chess with our lives and we lost.”

(CN) – The Seminole Tribe of Florida claims in court that Wells Fargo grossly mismanaged its money for years while charging the tribe millions in unwarranted fees.
In a complaint filed in Broward County. Fla. on Jan. 12, the Seminole Tribe created a trust account with Wells Fargo’s predecessor in interest, Wachovia Bank, intent on using the revenue derived from its gaming facilities in Florida to help promote the economic development, self-sufficiency and strong governments of the tribe.
At the time, tribal elders were responding to a marked increase in the Seminole population in South Florida, and saw bolstering the tribe’s financial interests as critical to the future well-being of its young people.
Despite its expectations for the bank, the tribe claims Wells Fargo created deficient and confusing account statements to cover up the collection of unauthorized fees to the minor trust beneficiaries, the complaint says.
The Seminole Tribe members also say that they lost at least $100 million dollars due to Wells Fargo mismanagement of their trust assets by using reckless investment strategies.

U.S. District Judge George B. Daniels on Jan. 8 dismissed the case, finding that JPMorgan’s actions taken as a sponsor of the plan didn’t amount to fiduciary functions that triggered liability under the Employee Retirement Income Security Act.

The current and former employees bringing the suit said…

Criticism of US government leniency on Wall Street legal transgressions is now being covered widely – even by trade publications such as the National Mortgage Professional Magazine. On January 18, the trade publication ran an article about Sen. Elizabeth Warren (D-Massachusetts) condemning the most recent US government settlement with a “too-big-to-fail” financial firm, in this case Goldman Sachs, for illegal abuse of the mortgage market:

Sen. Warren used her Facebook page to denounce the agreement, noting that the settlement sum was “barely a fraction of the billions investors lost” while arguing that Goldman Sachs was not properly penalized for its actions.

“That’s not justice – it’s a white flag of surrender,” she wrote. “It’s time to end this farce. These companies think they’re above the law – and too many government officials go along with them. A first step would be to pass the bipartisan Truth in Settlements Act to shine more light on these backroom deals. A second step would be to get government officials who have the backbone to fight back.”

The publication, which is geared toward professionals in the mortgage industry, also tellingly noted, “In announcing the [$5.1 billion] settlement, Goldman Sachs made no admission of guilt or error, and no executive from the New York-based financial giant will face criminal or civil charges.”

When asked Thursday about how campaign contributions from the financial services industry might influence her efforts to reign in Wall Street, Hillary Clinton continued a recent attack on her main rival for the Democratic presidential nomination.

“If you have a chance to talk to Sen. (Bernie) Sanders, you can ask him: Why did he vote to deregulate swaps and derivatives?” Clinton told the Press-Citizen editorial board. “He voted not once, he voted twice. I’m not the one who did that. He did.”

It was the first time during an hourlong interview Thursday with the editorial board that Clinton referred to the Vermont senator by name.

And the comment capped off a day filled with the former first lady and secretary of state drawing more pointed distinctions between herself and Sanders less than two weeks before the Feb. 1 Iowa caucus.

Clinton had made a similar comment during the Jan. 17 Democratic debate in Charleston, S.C., referring to Sanders’ votes as a member of the House of Representatives on two versions of the Commodity Futures Modernization Act of 2000. The legislation led to unregulated trading of certain types of financial instruments, including over-the-counter derivatives and credit default swaps.

In neither the debate nor the interview did Clinton note that her husband, Bill Clinton, signed the legislation into law.

Clinton, instead, said Thursday that she found it “perversely flattering” that her Democratic and Republican opponents alike were attacking her ties to Wall Street when economists like New York Times columnist Paul Krugman say she makes the better case for reining in the shadow banks.

“They’re scared of me because they know I mean what I say, and they know I get things done,” she said. “So their agenda is not my agenda. They know it, and they want to try to derail me, before I can rein them in.”

1. My favorite cartoon this week sums up this problem nicely: 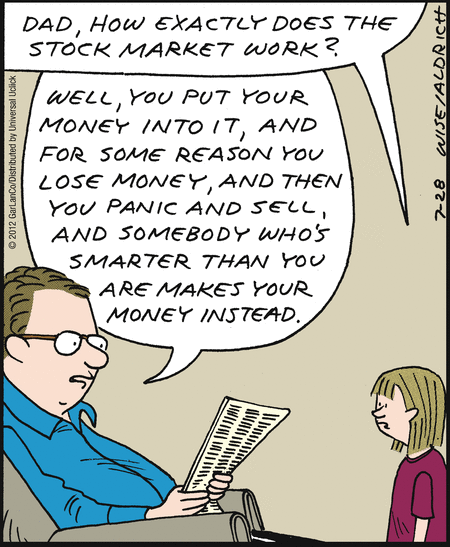 2. Here’s one for U.S. investors preparing for the expected weekend blizzard: 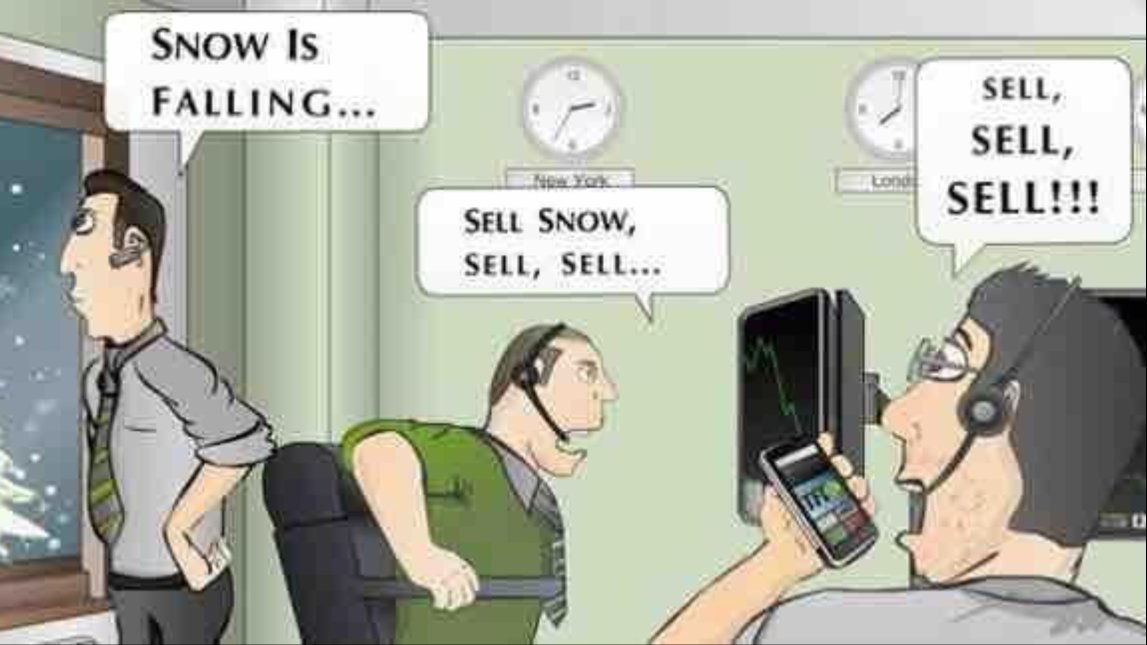 The bank awarded Dimon, its chief executive officer and chairman, $27 million for 2015, up from $20 million a year earlier, according to a regulatory filing Thursday. The package includes $20.5 million in performance share units, a new pay element tied to future targets. Proxy advisers had complained last year that the company lacked concrete goals for its executives. Dimon also got a $5 million cash bonus and a $1.5 million salary.