Media has forgotten once again that the Presidential race is not only between Democrats and Republicans. There has never been media coverage for the Green Party. Who is Jill Stein? From Jill Stein’s website:

Jill Stein was the Green Party’s 2012 candidate for president of the United States. She is an organizer, physician, and pioneering environmental-health advocate. She has led initiatives promoting healthy communities, local green economies and the revitalization of democracy – addressing issues such as campaign finance reform, green jobs, racially-just redistricting, and the cleanup of incinerators, coal plants, and toxics. She was a principal organizer for the Global Climate Convergence for People, Planet and Peace over Profit.

Here are some of Ms. Stein’s plan for the people:

Key points of the Power to the People Plan:

Create millions of jobs by transitioning to 100% clean renewable energy by 2030, and investing in public transit, sustainable agriculture, and conservation.

Jobs as a Right:

Guarantee economic human rights, including access to food, water, housing, and utilities, with effective anti-poverty programs to ensure every American a life of dignity.

Health Care as a Right:

Establish an improved “Medicare For All” single-payer public health insurance program to provide everyone with quality health care, at huge savings.

Education as a Right:

And here are the entire 2016 Presidential candidates: 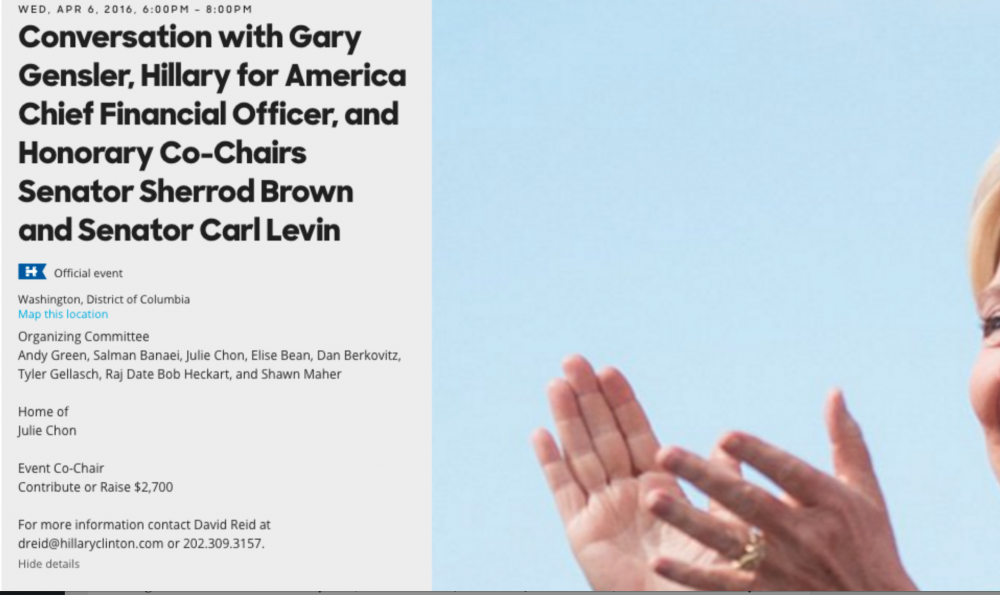 This will certainly be a continuing topic of discussion between Sanders and Clinton in the heated Democratic Presidential race….

AS HILLARY CLINTON questions rival Bernie Sanders over the depth of his financial reform ideas this week, a group of former government officials — once tasked with regulating Wall Street and now working in the financial industry or as Wall Street lobbyists — are participating in a fundraiser for her in the nation’s capital.

Several members of the organizing committee are now either advocating for corporate clients or advising them how to best work with and around the regulations they once enforced.

One member of the committee is Raj Date. Date was the deputy director of the Consumer Financial Protection Bureau, tasked with reining in Wall Street abuses. In January 2013, he left the bureau and by April started a new lending firm, Fenway Summer. He then became an adviser to Promontory Financial Group, which pitches Date as advising its “clients on complying with consumer protection regulation and managing complex risks.”

Another member of the organizing committee is Bob Heckart. Heckart is aformer Senate staffer who, according to his bio, worked on the “implementation of the Dodd-Frank Act and the Volker Rule, tax reform legislation, abuse of corporate tax loopholes, securities markets regulation, and other financial policy issues” for Sen. Levin. Prior to that, he was senior adviser for economic and financial policy for then-Sen. Kirsten Gillibrand, D-N.Y., and served as “her liaison with Wall Street.” Today, he is a senior counsel at Davis Polk & Wardwell LLP, the same major Wall Street law firm he worked for before getting hired by Gillibrand. His practice focuses on hedge funds, capital markets, credit, and real estate.

Tyler Gellasch, another organizer of the fundraiser, also worked for Levin. His biography describes him as having been “intimately involved in drafting several high-profile pieces of legislation, including the Volcker Rule provisions of the Dodd-Frank Act, the crowdfunding provisions of the JOBS Act, and the securities law provisions of the STOCK Act.” Gellasch today works for the Healthy Markets Association, a group that advocates for its members, which include various financial firms.

They want principal reduction and they want it now

A group of “anti-foreclosure” protestors disrupted a lecture given by Federal Housing Finance Agency Director Mel Watt at Harvard Law School on Monday, eventually leading to the event being prematurely canceled amid security concerns.

According to the Harvard Crimson, the event was supposed to be a “fire-side chat” about the role of the FHFA and federal housing policy, but scores of housing rights advocates showed up and repeatedly interrupted Watt.

The Harvard Crimson report states that members of three groups, City Life, Lynn United for Change, and Springfield No One Leaves, made up nearly all of the audience at the event.

And what do those groups want? They want Watt to approve principal reduction plans for Fannie Mae and Freddie Mac.

Last month, the Wall Street Journal reported that the FHFA recently approved a plan for the government-sponsored enterprises to engage in principal reduction on a large scale for the first time since the housing crisis.

But later that same day, Watt gave a speech at a public policy luncheon hosted by the Women in Housing and Finance, in which he said that the issue of principal reduction has been the “most challenging” that the FHFA has faced in his two years there and that in actuality, no decision on principal reduction had been made.

Watt also said that his objective for any principal reduction plan was to achieve a “win-win” situation for borrowers and the GSEs alike.

“Many have asked why it has taken so long to reach a conclusion. The direct answer is that making this determination involves consideration of an extremely complicated set of factors,” Watt said at the time.

Watt told the audience Monday that the FHFA is not prepared to announce a decision on principal reduction, but planned to announce it soon.