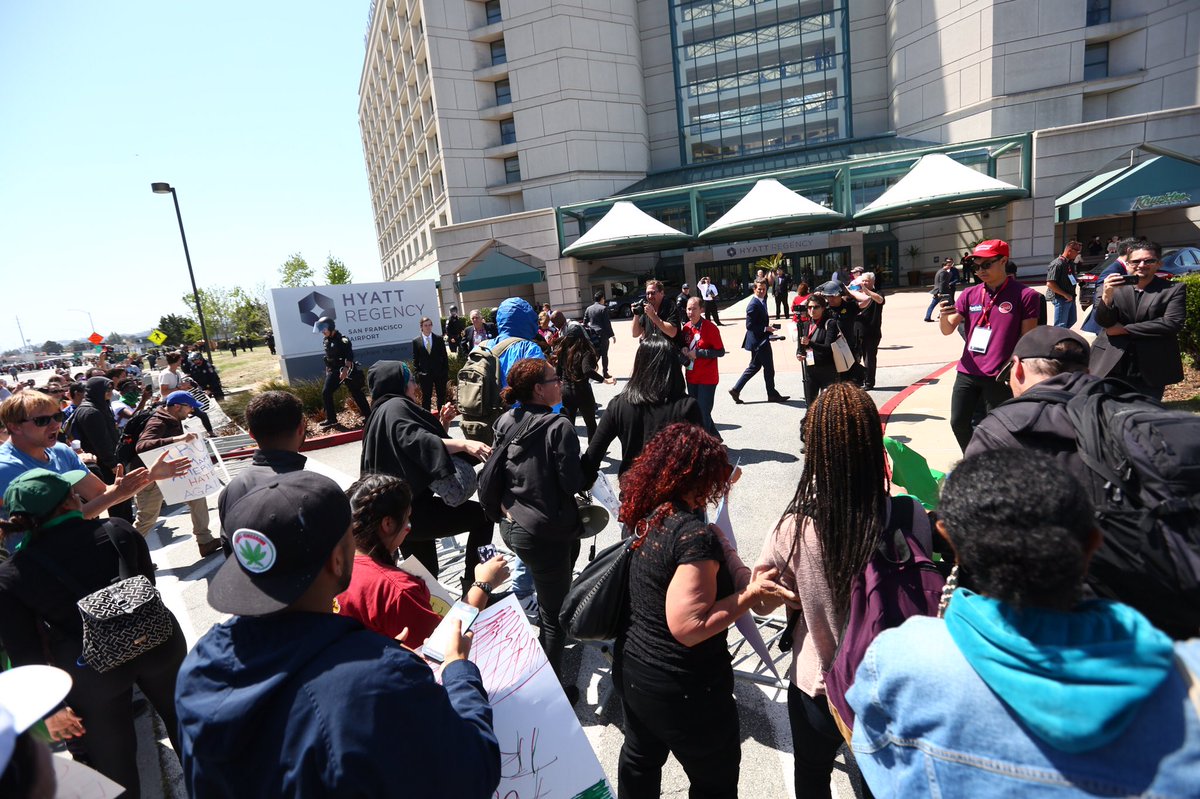 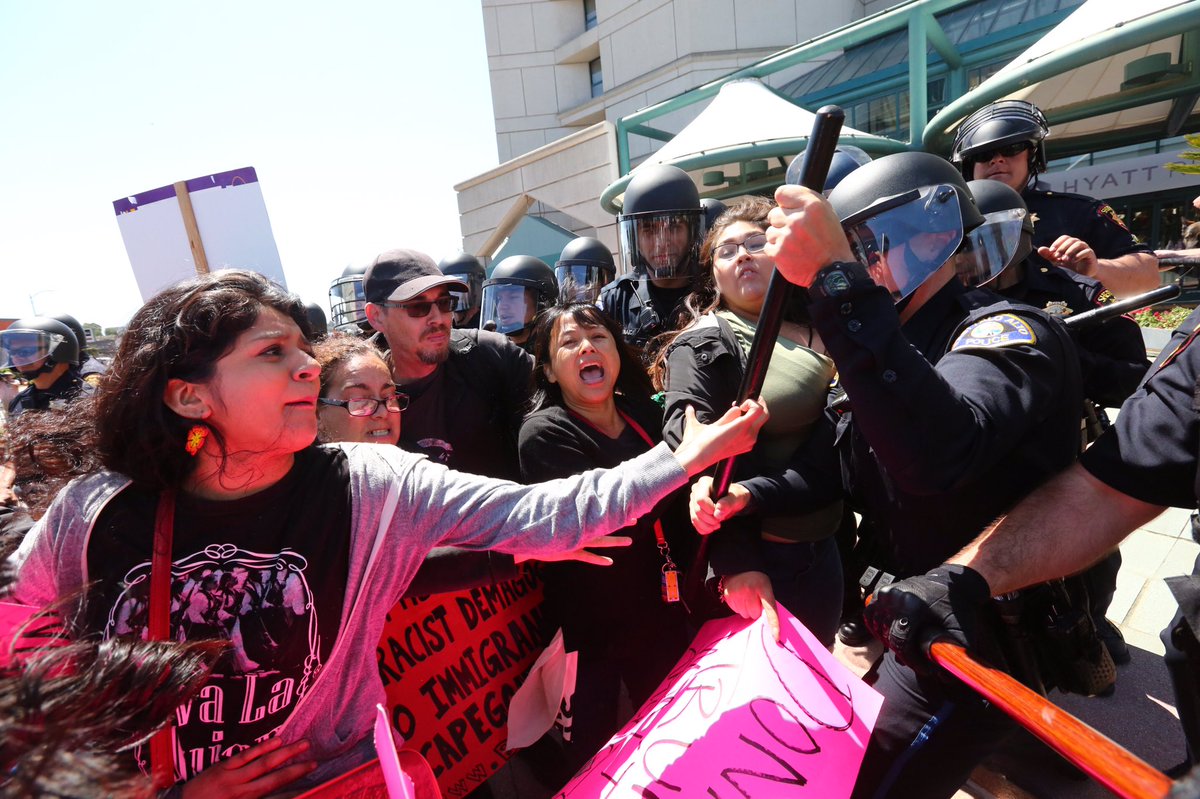 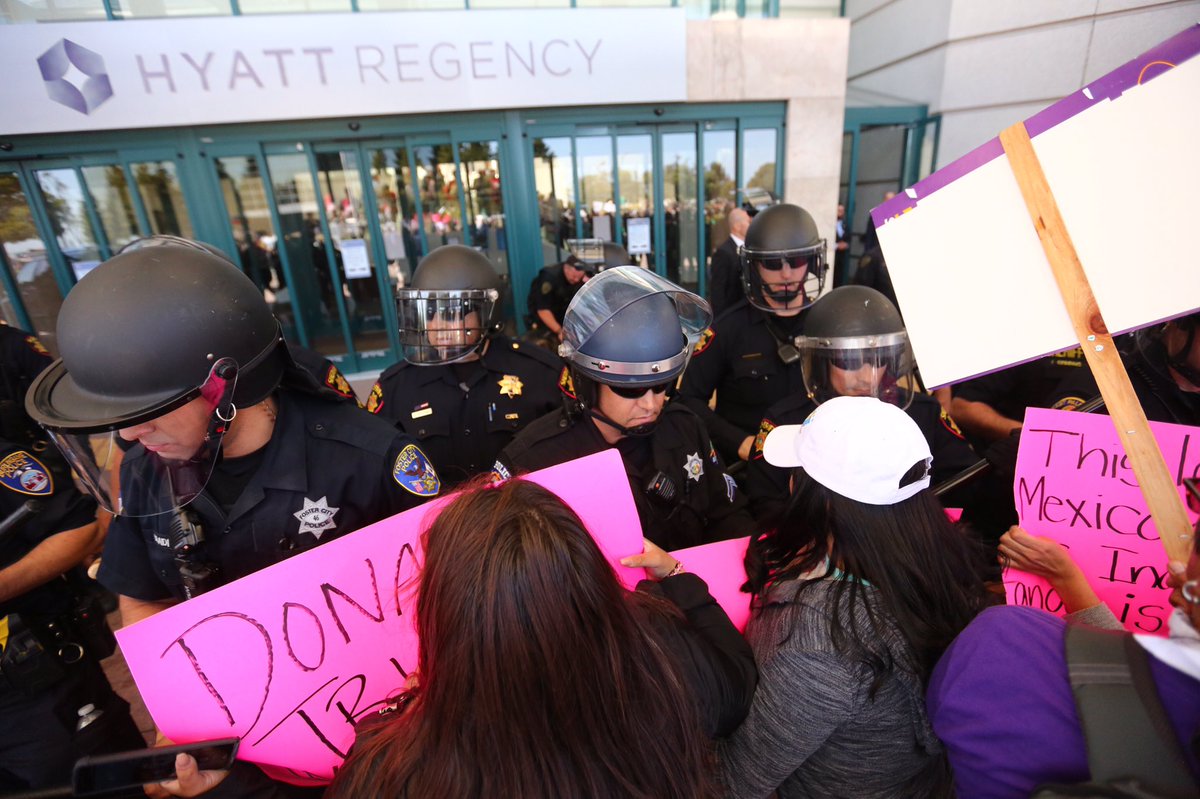 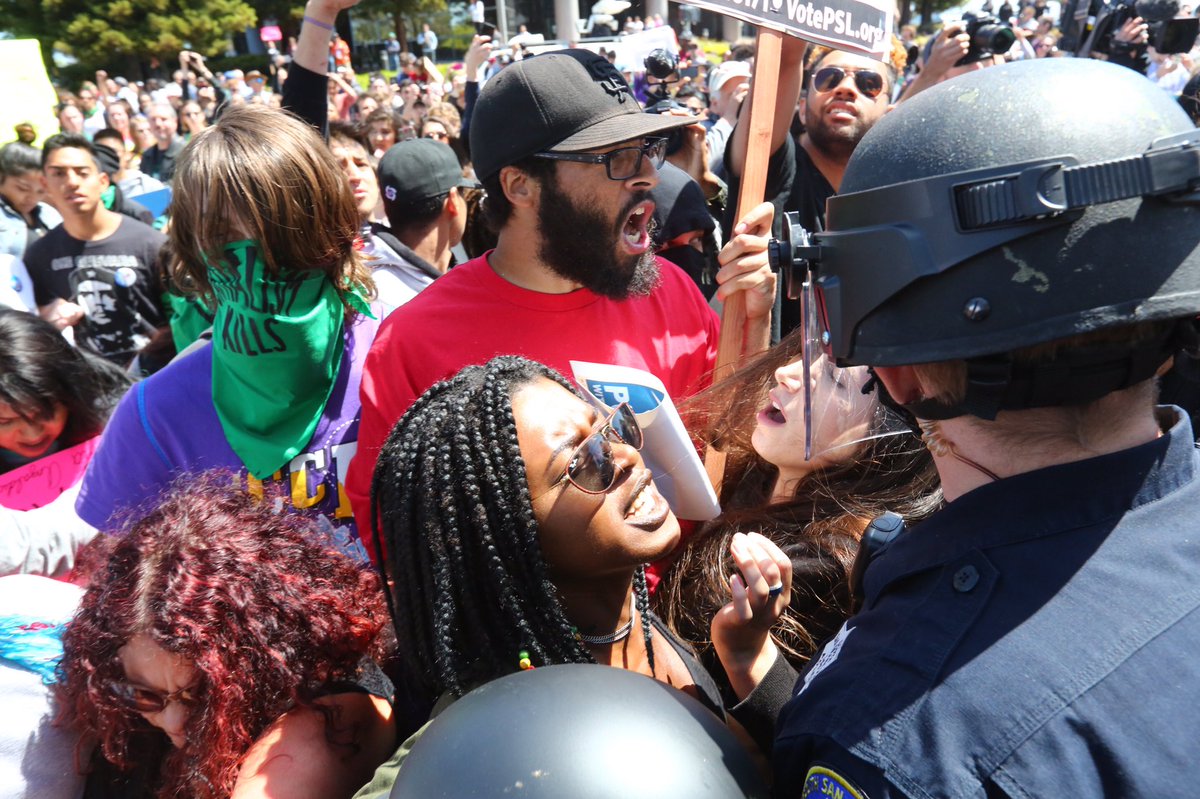 Welcome to California, Donald! This is pretty sad that this protest is at the Hyatt Regency in Burlingame since I stayed at that hotel for an event years ago. Burlingame is nice city to visit. It is too bad that the city is trashed because of Trump’s visit and rally. It will be interesting the outcome of Clinton and/or Sanders’ campaign visit in that area and that is if either one of them visits the city.

Several hundred protesters clashed with police and blocked the highway Friday afternoon in front of the Burlingame, California venue where Donald Trump was scheduled to kick off the California Republican Convention.

As the GOP frontrunner’s motorcade neared the Hyatt Regency Hotel, the cars made a U-turn and pulled to the shoulder of the freeway, allowing Trump and his entourage to disembark and proceed to a side entrance on foot.

Outside the event, protesters carried signs decrying Trump’s rhetoric about immigrants and minorities. A few knocked barricades aside in an effort to enter the hotel and were pushed back by security guards wielding batons.

This conspiracy was all in the family

And, as it turns out, the family that plays together also goes to jail together.

According to the U.S. Attorney’s Office for the Easter District of Georgia, Raza, his wife, Humaira, and her brothers will each serve time in federal prison for their roles in a scheme that saw the group falsify loan documents and commit mortgage fraud while all four were employed by SunTrust Mortgage in the 2000’s.

The U.S. Attorney’s Office stated that in 2005, Raza was hired to serve as vice president at SunTrust Mortgage, and the company then tasked him with opening a new office location in Annandale, Virginia.

Raza staffed the office with his wife and her brothers. Farukh Iqbal and Mohammad Ali Haider joined the company and served as loan officers.

According to court documents, SunTrust Mortgage underwriters approved the loans, which totaling several million dollars, based in large part upon the fake documents in the files, and ultimately borrowers were given loans to buy homes that they could not afford.

Notices issued to all those named in Panama Papers: Government

NEW DELHI: Government today said in the Lok Sabha that it has issued notices to all the people named in the Panama Papers but tax laws do not allow the proceedings to be made public till cases are filed in courts.

Responding to questions on tax evasion and black money, Finance Minister Arun Jaitley said in the Panama Papers leak case, notices have been issued to all those whose names have appeared.

The minister explained that Section 138 of the Income Tax Act bars the proceedings of a case be made public till a case is filed in a court.

Meanwhile, responding to another supplementary, Minister of State for Finance Jayant Sinha said the government is looking into papers received from HSBC and Panama and the various laws, including the one on foreign black money, are being invoked.

Six prominent Icelanders have resigned because of the Panama papers

The Panama papers, leaked form Mossack Fonseca, continue to send shockwaves through Icelandic society. Earlier in April revelations from the leaked documents about Wintris, an offshore company registered in the British Virgin Islands and owned by the wife of then Prime Minister Sigmundur Davíð Gunnlaugsson, cost the Prime Minister his job, resulted in a new government being formed and general elections being held in October, six months before the current term runs out.

Last week further revelations showing that investors Jón Ásgeir Jóhannesson and Ingibjörg Pálmadóttir own offshore companies that have been used to finance their investments and companies, and to pay off debt to creditors were published.

And on Monday Kjarninn reported that Moussaieff Jewellers, the family company of Iceland’s first lady Dorrit Moussaieff, owned part in an offshore company in the British Virgin Islands from 1999 to 2005. In 2005, the company sold its share to the first lady’s parents. The company, called Lasca Finance Limited, is in the Panama papers. President Ólafur Ragnar Grímsson had been asked in an interview on CNN a few days earlier whether he or his family was connected to offshore companies and whether something would come to light about them. “No, no, no, no, no. That will not be the case,” the president said.

Foreclosures: What Role Should a Trustee Play?

It’s one of those questions that seems pulled from a final exam at the Harvard Business School but if you’re a homeowner caught in the foreclosure wringer it’s something worth thinking about. Now, if you’re seeking an answer about the trustee’s role from any of the parties suing to extricate you from home and hearth the response, no doubt, will be an unequivocal “no.”

When it comes to snatching houses current banking wisdom goes something like this: mortgages (most of them) are held in securitized trusts which in turn hire servicers to collect monthly payments and if something goes awry — say the homeowner defaults on monthly payments — the servicer can initiate a foreclosure action on behalf of the investors in the trust. The role of the trustee — whose name usually appears as “plaintiff” in a foreclosure lawsuit — is simply that of a passive custodian storing the original mortgage documents (“wet ink,” in the vernacular).

It’s almost an article of faith in the foreclosure industry that trustees stand idly by as the servicers do the dirty work. Ask a trustee to comment on their role in a particular foreclosure case they’ll invariably respond with:

Loan servicing companies, and not {fill in the blank} as trustee, are responsible for foreclosure activity, the resale of foreclosed properties, and other foreclosure-related tasks including decisions regarding loan modifications and evictions. The trustee and servicer are parties to the pooling and servicing agreement which governs the administration of the trust.

Fill in the blank with “Deutsche Bank” and this is precisely the boilerplate supplied by the PR folks when I’ve made inquiries regarding foreclosures brought by Deutsche as trustee. These cases include a 2007 foreclosure/eviction of a Maryville, Tennessee, couple, Bob and Stacy Schmidt; a 2010 foreclosure of a Los Angeles postal worker,Carlos Marroquin; a foreclosure initiated in 2011 against an Akron, Ohio, couple,Glenn and Ann Holden, and in 2014, a foreclosure targeting Houston, Texas, homeowner, Tommy Cooper.

Pooling and Servicing Agreements (“PSA’s”), trustees claim, are the legal handcuffs limiting their role in foreclosures. PSA’s are complicated, tortuous, sleep-inducing documents written by legions of tax lawyers defining how investors in mortgage-backed securities can make their money while avoiding the taxman. Servicers contracted to the trust, via the PSA’s, are given virtual carte blanche to go after underwater homeowners and as a rule have been quick on the foreclosure draw given they make more dough via eviction than through negotiated loan modifications.

Enter Christopher Wyatt: a homeowner’s advocate and former Litton Loan Servicing executive with twenty years’ experience in the mortgage game and he’s never bought into the passive, standby status claimed by trustees. As head of a Litton team fielding homeowner complaints between 2001 and 2010 he received numerous phone calls from Deutsche Bank lawyers (Deutsche Bank being the trustee) asking him to look into situations where a foreclosure may, in fact, not be a good thing for the investment trusts they represent.

In late August, 2007, Wyatt received an interesting memo from Deutsche Bank referring to “one or more securitization trusts for which Deutsche Bank National Trust Company or Deutsche Bank Trust Company Americas act as trustee.” It was a warning of sorts, highlighting the “significant hardship being imposed on tenants, including low-income families, who may be dislocated in the mortgage foreclosure process and about the potential deterioration of neighborhoods surrounding vacant properties.”

In short, the memo seemed to fly in the face of common foreclosure wisdom that trustees keep their mouths shed, eyes closed and noses out of any on-going litigation. It called for servicers to follow “good housekeeping” principles and avoid foreclosures “if eviction will not enhance the marketability or resale of the value on Trust REO properties,” adding, that “maintaining occupancy may preserve affected neighborhoods…”

I ran the August 30, 2007 memo by Lynn Armentrout, currently the Deputy Director, Housing, Brooklyn Legal Services and someone with a fair bit of experience dealing with foreclosure issues (formerly she served as director of the Foreclosure Project at the NYC City Bar Justice Center)

In my experience, Deutsche Bank as trustee has been completely disengaged from the foreclosure crisis and unconcerned about the impact its foreclosures were having. The memo seems to be written by an entirely different entity, one that cares about communities.

A Westland couple likely will keep their home, after arguing in court they weren’t aware they were facing foreclosure over an unpaid $3,000 tax bill.

Wayne County Treasurer Eric Sabree said his staff and an attorney for Ron and Bernice King are working on a deal that would allow the Kings to keep the home after the delinquent 2012 taxes are paid.

The Detroit News last month profiled the couple in an article about allegations that foreclosure notices don’t always arrive by mail or get posted on doors. They said they sent payments to the county and believed they were on a plan to avoid foreclosure.

“It is a world of relief,” Ron King, 57, said Friday. “I was scared to death about having to start over. And my health is not good.”

“I am glad the Wayne County Treasurer was able to work with us.”

Interesting..Banks can assert constitutional rights but can’t be sent to prison..

A trade group for the nation’s largest banks has asserted a constitutional right to risk-free profit from the Federal Reserve.

Rob Nichols, the chief lobbyist for the American Bankers Association, argued in a comment letter Thursday that a recent federal law reducing the dividend on the stock that banks purchase as part of membership in the Federal Reserve system, violates the Fifth Amendment clause banning the uncompensated seizure of property.

Congress reduced the dividend as part of a deal to pay for transportation projects. Dividends for the stock, which cannot be bought or sold, had been set at 6 percent since the Federal Reserve’s inception in 1913. Banks cannot ever lose money on the stock; they’re even paid out if their regional Fed bank disbands. So the dividend represented a risk-free profit, earning back its investment in full every 17 years.

The dividend cut, from 6 percent to the current interest rate on the 10-year Treasury note, is estimated to reduce the banks’ payments by roughly $7 billion over 10 years. The change only applies to banks with more than $10 billion in assets.

“The Takings Clause of the Fifth Amendment provides that ‘private property’ shall not ‘be taken for public use, without just compensation,’” Nichols wrote in his comment letter to the Fed, which is preparing to implement the dividend cut. Nichols added that “The dividend rate remained unchanged for over 100 years, and it has long been considered fundamental to the Federal Reserve’s ability to attract member banks.”