The anonymous whistleblower behind the Panama Papers has conditionally offered to make the documents available to government authorities.

In a statement issued to the German newspaper Süddeutsche Zeitung and the International Consortium of Investigative Journalists, the so-called “John Doe” behind the biggest information leak in history cites the need for better whistleblower protection and has hinted at even more revelations to come.

Titled “The Revolution Will Be Digitized” the 1800-word statement gives justification for the leak, saying that “income inequality is one of the defining issues of our time” and says that government authorities need to do more to address it.

Süddeutsche Zeitung has authenticated that the statement came from the Panama Papers source.

Head over to Panamapapers.icij.org to read the statement in full.

Trump argued for low rates to keep the national debt of $19 trillion somewhat manageable. Calling himself “the king of debt” in his business dealings, he warned that the national debt would be troublesome if the cost of borrowing increases.

“We’re paying a very low interest rate. What happens if that interest rate goes up 2, 3, 4 points?” he asked. “We don’t have a country.” The U.S. should refinance longer-term debt, he added.

onald Trump told CNBC on Thursday he’s for low interest rates unless inflation perks up, and he would probably replace Janet Yellen when her term is up as Federal Reserve chair.

“I have nothing against Janet Yellen whatsoever. I think she’s been doing her job,” the presumptive GOP presidential nominee said in a wide-ranging phone interview with “Squawk Box.”

“I don’t know her. She’s a very capable person. People I know have a high regard for her. But she’s not a Republican,” he added.

Trump argued for low rates to keep the national debt of $19 trillion somewhat manageable. Calling himself “the king of debt” in his business dealings, he warned that the national debt would be troublesome if the cost of borrowing increases.

“We’re paying a very low interest rate. What happens if that interest rate goes up 2, 3, 4 points?” he asked. “We don’t have a country.” The U.S. should refinance longer-term debt, he added.

“We do need money to rebuild the infrastructure of the country,” he said, railing against spending trillions of dollars in wars in the Mideast while American roadways, bridges, mass transit systems and airports are crumbling.

Trump repeated that he would renegotiate the nation’s trade agreements, which he contends were hammered out by “political hacks” rather than the “brightest business people.” 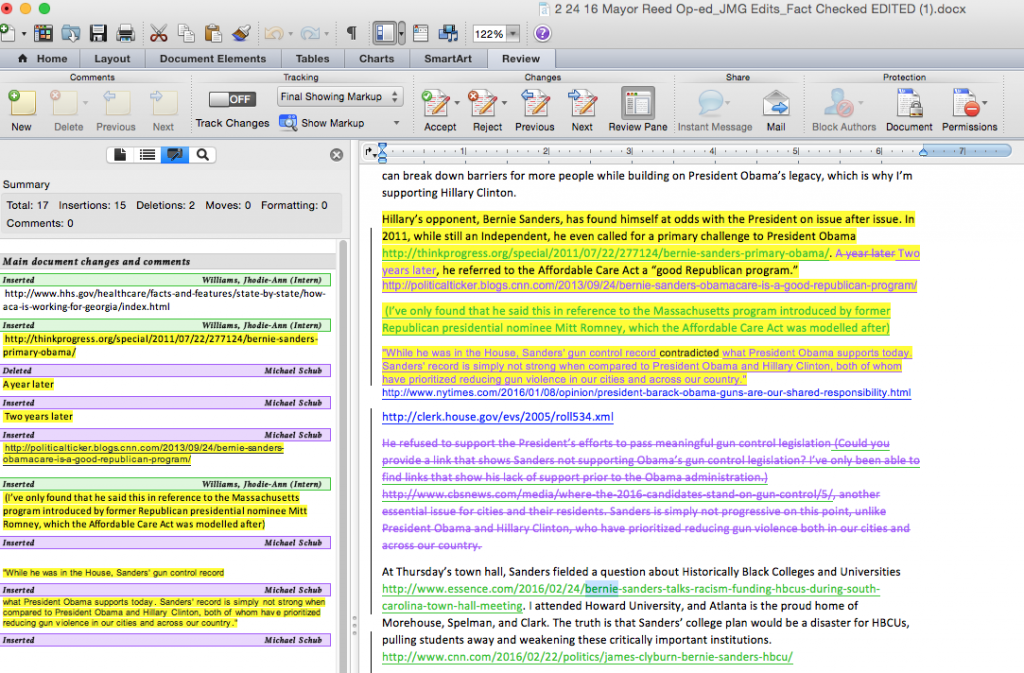 A FEW DAYS BEFORE the Georgia primary, influential Atlanta Mayor Kasim Reed published a column on CNN.com praising Hillary Clinton and ripping her opponent, Bernie Sanders. Reed attacked Sanders as being out of step with Democrats on gun policy, and accused him of elevating a “one-issue platform” that ignores the plight of the “single mother riding two buses to her second job.”

But emails released from Reed’s office indicate that the column, which pilloried Sanders as out of touch with the poor, was primarily written by a corporate lobbyist, and was edited by Correct the Record, one of several pro-Clinton Super PACs.

Anne Torres, the mayor’s director of communications, told The Intercept this week that the column was not written by the mayor, but by Tharon Johnson, a former Reed adviser who now works as a lobbyist for UnitedHealth, Honda, and MGM Resorts, among other clients. The column’s revisions by staffers from Correct the Record are documented in the emails.

Johnson, Torres told us, is a “capable writer,” who managed Reed’s first campaign. Reed “provided verbal edits and feedback to Tharon, but other than that, no one from my office or the mayor’s office wrote this op-ed,” Torres said.

One email describes how Torres was introduced to Daniel Wessel, a press secretary for Correct the Record, by Johnson.

On the morning before the column was published, Torres sent an email to Correct the Record asking Wessel to send her the “final version.” She sent over Reed’s bio and headshot and wrote, “Let me know if you need anything else.”

“Attached is a slightly modified version after CNN ran a fact check,” Wessel wrote back. The attached Word document shows a number of revisions through track changes, with multiple Correct the Record staffers providing edits. (The metadata of the document shows that Wessel created the document.)

Wessel emailed Torres and Johnson again later that day, after the piece was posted, to indicate that he was in touch with CNN to make a post-publication “fix” to an error in the piece. “Thank you for all your help, turned out great,” Wessel wrote. “We’ll promote throughout the day.”

Updated | 3:02 p.m. The anonymous source responsible for leaking the vast document trove known as the Panama Papers said in a manifestopublished on Friday that she or he “would be willing to cooperate with law enforcement” to ensure the prosecution of wrongdoing revealed by the paper trail — but only once “governments codify legal protections for whistleblowers into law.”

The source wrote that the leaked files on offshore business dealings and shell companies organized by Mossack Fonseca, a law firm based in Panama, revealed “the scandal of what is legal and allowed.”

But the source, who took the name “John Doe,” argued that since “the law firm, its founders, and employees actually did knowingly violate myriad laws worldwide, repeatedly,” the wrongdoers there should now be prosecuted.

Doe added that prosecutors require access to the original documents, noting that media outlets “have rightly stated that they will not provide them to law enforcement agencies. I, however, would be willing to cooperate with law enforcement to the extent that I am able.”

“That being said,” Doe continued, “I have watched as one after another, whistleblowers and activists in the United States and Europe have had their lives destroyed by the circumstances they find themselves in after shining a light on obvious wrongdoing.” Doe explained:

Edward Snowden is stranded in Moscow, exiled due to the Obama administration’s decision to prosecute him under the Espionage Act. For his revelations about the NSA, he deserves a hero’s welcome and a substantial prize, not banishment. Bradley Birkenfeld was awarded millions for his information concerning Swiss bank UBS—and was still given a prison sentence by the Justice Department. Antoine Deltour is presently on trial for providing journalists with information about how Luxembourg granted secret “sweetheart” tax deals to multi-national corporations, effectively stealing billions in tax revenues from its neighbour countries. And there are plenty more examples.

An Italian prosecutor is investigating Deutsche Bank over its sale of 7 billion euros ($8 billion) of Italian government bonds five years ago, an investigative source told Reuters.

A prosecutor in Trani, a town in southern Italy, is investigating because Deutsche Bank allegedly told clients in a research note in early 2011 that Italy’s public debt was no cause for concern, and then sold almost 90 percent of its own holding of the country’s bonds, the source said on Friday.

“We do not believe there is a case to answer here and are confident that we acted appropriately,” a spokesman for Deutsche Bank said in an email to Reuters, adding the German lender was cooperating with Italian authorities.

Deutsche Bank sold the bonds in the first half of 2011 as Italy slid toward a debt crisis that eventually brought down the government of former Prime Minister Silvio Berlusconi.

And the plot thickens..

Donald Trump’s new national finance chairman – a former head of the mortgage department for Goldman Sachs – was sued in 2010 for the return of $3.2 million in fake profit from an account with Ponzi scheme mastermind Bernie Madoff.

Steven Mnuchin was named Trump’s fiancé chairman Thursday, according to Bloomberg. He was linked to Madoff through his late mother, who invested about $2 million with the financier and saw her investment grow to $5.2 million.

After their mother died in 2005, Mnuchin and his brother withdrew the money from her Madoff account. In 2008, Madoff was arrested. And in 2010, trustee Irving Picard, who filed multiple lawsuits seeking restitution for the victims of Madoff’s $17.5 billion fraud, sued for $3.2 million of the Mnuchins’ $5.2 million, saying that it was fake profit.