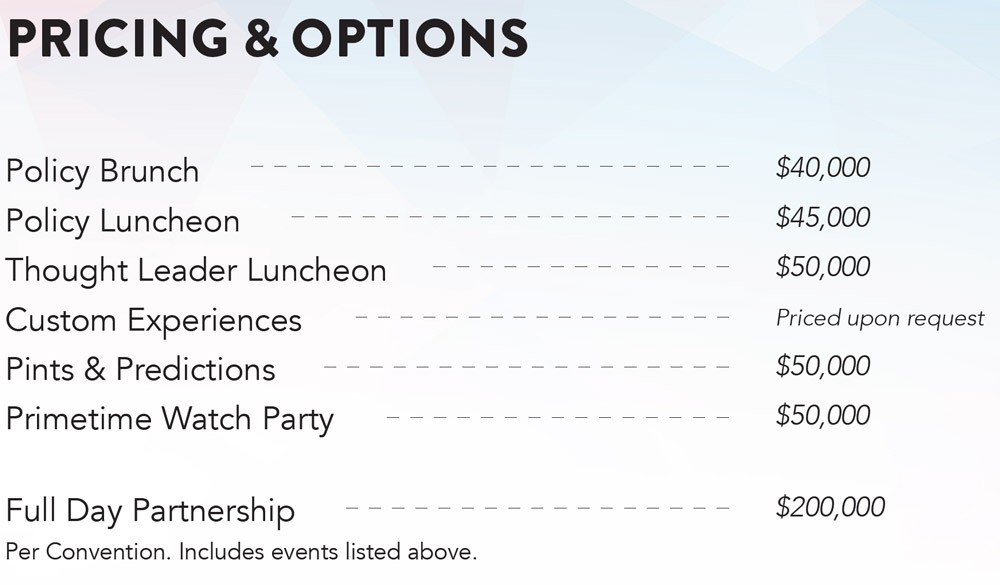 Screen grab of the price list from The Hill’s brochure.

FOR HIGH-ROLLING special interests looking to make an impression at the presidential conventions next month, one option is to pay a lot of money to a media outlet. Lobbyists for the oil industry, for instance, are picking up the tab for leading Beltway publications to host energy policy discussions at the convention, including the Atlantic and Politico.

And for the right price, some political media outlets are even offering special interviews with editorial staffers and promotional coverage at the convention.

The Hill newspaper, which is sponsoring events at both the RNC and DNC, offers sponsors “a turnkey and custom experience,” including a “Thought-Leader Luncheon” moderated by The Hill’s editorial staff and the luncheon sponsor, who also gets to “curate a list of participants from politics, government, media and industry”.

Sponsors who pay $200,000 are promised convention interviews with The Hill’s editorial staff for “up to three named executives or organization representatives of your choice,” according to a brochure obtained by The Intercept. “These interviews are pieces of earned media,” the brochure says, “and will be hosted on a dedicated page on thehill.com and promoted across The Hill’s digital and social media channels.” Our inquiries to The Hill went unanswered.

The Economist, along with its subsidiary CQ Roll Call, similarly offers convention sponsorship packages. Sponsors can share lunches or dinners “with top policy experts from CQ Roll Call and The Economist” that are livestreamed “so your reach extends beyond the room.” According to the website advertising the packages, sponsoring a meal is also good for “getting your CEO publicity — we’ll film an interview segment after event concludes.” The Economist/CQ Roll Call did not respond to our inquiries. 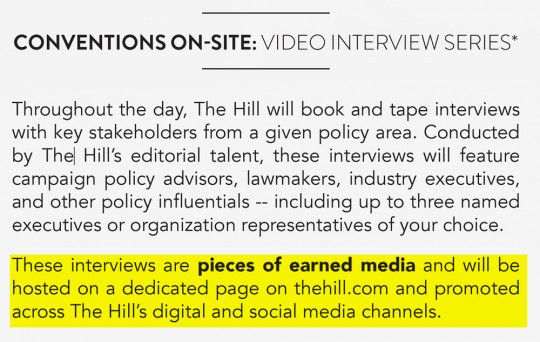 Screen grab from The Hill’s brochure; highlight by The Intercept.

An update on Bridgegate:

This is what is missing from the federal investigation into Bridgegate:

Text messages the governor sent and received during the ensuing legislative investigation.

And now, according to new court filings, a personal email account he used as the scandal enveloped his administration.

None of this evidence was provided to federal criminal investigators probing the Bridgegate scandal, according to court documents.

For two and half years, Christie has insisted that both his personal and government email accounts were searched by investigators, and there was nothing to indicate he knew anything about the lane closures scheme. He also claimed he never did government work on his personal email account.

But new court documents indicate that a personal email account he shared with his wife, Mary Pat, was never searched — and he used that account to send at least one Bridgegate-related government email to David Samson, the chairman of the Port Authority of New York and New Jersey, which oversees the bridge. That email forwarded an article with the comment “per our earlier conversation” that discussed a phone conversation Christie had with New York Gov. Andrew Cuomo concerning the lane closure investigation.

Christie’s own taxpayer-funded attorneys from the Gibson Dunn law firm, which has so far billed more than $10 million to the state, were in charge of responding to federal and legislative subpoenas seeking such emails. The lawyers simply ignored this account, even though Christie regularly used personal email accounts, including the one shared with his wife, for government business, sources say. He even used this account to email journalists concerning state business.

Two former Christie appointees indicted in the scheme are alleging that Gibson Dunn destroyed and withheld evidence. In defending itself, Gibson Dunn for the first time this week acknowledged that it never searched an email account where the sender was “Chris and Mary Pat Christie,” until one of the defendants discovered the email to Samson earlier this month.

According to the legal papers that email was sent from a joint marital account of the governor and his wife, “which we understood was not used by the Governor for official business and contained nothing responsive.” Christie’s lawyers say they’ve now searched that account and found no emails “related to and contemporaneous with the lane realignment.”

In Trump Institute, Donald Trump had Florida partners with a record of fraud and were Romney’s “47% fundraisers

lol! Well, well, well… The same scam architects for Trump University held a fundraiser for Mitt Romney for President in 2012.. Who knew?

Donald Trump in 2005 had just launched his real estate “university,” online classes promising people the keys to his gold-plated lifestyle. But the New Yorker and partners wanted to expand into live seminars. Lacking experience, they scouted three companies.

Dynatech in Orlando got passed over because it already managed several brands. Whitney Education Group in Cape Coral gave off a bad vibe. “It didn’t take too much due diligence to look online and see the line of complaints about their business practices for us to feel uncomfortable,” a partner later explained.

Remarkably, it may have been avoided had the same scrutiny shown with Whitney Education been applied to the Milins.

Longtime operators on the get-rich-quick circuit, the Milins faced fraud and deceptive marketing allegations in numerous states. They settled cases in Texas in 1993 and Florida in 2001, only to see new allegations arise.

In a move that brings the Romney camp precariously close to the location of the candidate’s 47 percent blunder, the campaign is scheduled to rake in contributions at three invite-only fundraisers in Boca Raton, Florida. One of the hosts for these events is Marc Leder, the controversial private equity fund manager who gained notoriety in 2011 for a bacchanalian party he threw in the Hamptons. Leder held the $50,000-per-plate fundraiser at his Boca mansion in May where Romney deliveredhis “47 percent” rant. But he’s not the only member of the host committee with baggage. The organizers of this big-dollar fundraising spree include Mike and Irene Milin, a husband-wife team who have made a career out of peddling get-rich-quick schemes that state attorneys general have blasted as “deceptive,” “unconscionable,” and “illegal.”

Mother Jones obtained an invitation to the Boca fundraisers that names Leder and the Milins as members of the host committee. Others on the list are Florida lobbyist Marty Fiorentino, former US ambassador to the Bahamas Ned Siegel, and billionaire investor Wilbur Ross. Supporters can pay $2,500 per person to attend a general reception and $10,000 per person for a “VIP Photo Reception” at the posh St. Andrews Country Club. But the real moneymaker comes later that evening, at a $25,000-per-plate dinner at the home of Mike and Irene Milin. Vice presidential nominee Paul Ryan (not Romney) will attend the fundraisers, according to the invitation.

And if anyone remember Mike and Irene’s other scam company called National Grants Conferences where Former Rep. and then Arizona Senate candidate J.D. Hayworth (who ran against Senator John McCain in 2010) starred as the pitchman for “free” government money in 2007.

Donald Trump gets more media attention than the Holocaust, Sanders pointed out.

And 26 years later, the media is still obsessed with Donald Trump…. as the presumptive GOP Presidential nominee which is why he gets so much media attention and coverage…

Trump has been vocal about his dislike of Dodd-Frank legislation.

“Trump is really influenced by the school of thought that says that Dodd-Frank is really big and really complicated and imposed so many rules and regulations on the economy that it’s gotten in the way of growth and it’s impeded lending to small businesses,” Goldsmith said. “He’s said that he’s going to all but eliminate Dodd Frank. It’s not clear what he’s going to replace it with.”

His call against breaking up the biggest banks and taxing “carried interest,” which largely benefits hedge fund managers, actually aligns with Clinton. However, he, unlike Clinton, has also proposed to significantly reduce taxes on the wealthiest Americans.

One of his more controversial proposals is to audit the Federal Reserve. Supporters of the Fed believe worry this threatens objectivity in monetary policy.

“Clinton as a candidate for president has been shaped by two powerful forces,” Goldsmith said. “First, she was a senator from New York for eight years. She defended voting for TARP in part because it helped her constituents in the banking industry. But second she faced a ferocious primary challenge from the left and largely on this issue. And so her plan reflects that tension.”

Clinton said she will extend Dodd-Frank to the “shadow banking” sector to include hedge funds, private equity funds, and insurance companies, which in many ways were also responsible for the 2008 crisis. She would institute a risk fee on the banks and would increase taxes on short-term trading, because she wants to encourage investing with a longer view and perspective.

NEW YORK — New York City is taking a novel approach to addressing enduring pockets of the home-foreclosure crisis by buying long-unpaid mortgages, with plans to help owners stay in their homes if possible or use the properties as affordable housing if not, officials say.

It’s among the first cities to pursue buying such loans directly from the federal Department of Housing and Urban Development, officials say. Housing advocates and some lawmakers have pressed HUD to make it easier for cities and nonprofit groups, as opposed to investors, to buy troubled mortgages.

New York announced the $13 million program Thursday. So far, the program involves just 24 properties, containing a total of 41 homes and apartments. Officials say the cost includes millions in reserve for repairs that may not be required, and they cast the program as an experiment they hope to expand.

Mexican singer Ana Bárbara sued Wells Fargo Thursday, alleging two employees looted more than $400,000 from her accounts and forced her to lose another $884,000 after she had to cancel a concert tour.

The bank is “well-known for creating a corrupt business culture which pressures its employees to lure customers into setting up multiple undesired accounts … thereby maximizing Wells Fargo’s profits while at the same time exposing its customers to needless costs and injuries,” according to the lawsuit.

Wells Fargo also has “adopted the practice of enrolling its customers in online banking and online bill paying without their consent,” the suit alleges.

A Wells Fargo representative did not immediately reply to an email seeking comment.

The suit states that Arias, a fan of Bárbara’s who had attended some of her performances, approached Bárbara, in April 2012 and “then proceeded to insinuate himself into (her) circle of friends and associates.”