Can you figure out the amount of money you would owe on your loan after one year of interest? If not, you are part of about two-thirds of Americans who can’t pass a basic test of financial literacy.

The National Capability Study, conducted by the FINRA Foundation, surveyed 27,564 Americans, from June through October of last year, according to an article by Madaline Farber for Time. FINRA is a quasi-government organization that regulates brokers and Wall Street.

Bonds presented one of the biggest problems for respondents of the survey. Just 28% knew what happens to bond prices when interest rates fall. (They rise.) And less than half of all Americans appear to be able to answer basic questions about financial risk.

In fact, more Americans failed the test today than in 2009, according to the article. While 37% of Americans could pass the test this time around, in 2009, 42% could pass it.

This inability to pass a simple financial test is despite the Consumer Financial Protection Bureau’s attempts to educate homebuyers.

After months of criticism that its in-house court unfairly tilts justice against defendants, Wall Street’s top cop is making changes that could make the playing field more level.

The most significant alterations, which the Securities and Exchange Commission approved Wednesday, include giving those accused of financial misconduct more time to prepare for trial and stepped up ability to depose witnesses. While the SEC has said its administrative judges are independent arbitrators, defendants including Patriarch Partners founder Lynn Tilton have argued that the process lacks the legal protections available to them in federal court.

Industry execs won’t go near the GOP event for fear of insulting clients and workforce.

NEW YORK — Wall Street executives are hitting the sell button on the GOP convention in Cleveland next week.

Bankers typically use the quadrennial Republican Party gathering to schmooze clients, host parties and flaunt their connections to the nominee and other senior officials. In 2012, they flooded the Tampa Bay area to celebrate one of the industry’s favorite sons, Mitt Romney, getting the nomination.

But with real estate mogul Donald Trump running on an anti-trade, populist platform — while sporting sky-high unpopularity ratings — many bankers and traders want nothing to do with the convention this year.

Neither do most corporate CEOs. The prospect of Trump bashing trade deals and talking about building a wall with Mexico, coupled with the threat of potentially disruptive protests, is largely keeping the financial world away from Cleveland.

“With Trump you have what is a fairly divisive campaign and you have the potential of unnecessarily offending a whole bunch of people if you show up there in a prominent way,” said Matt McDonald, a partner at consulting firm Hamilton Place Strategies, which does business with some of the nation’s biggest banks. “On top of that, a lot of the people that you might want to get in front of for one reason or another are not going to be there.”

McDonald cited the long roster of senior Republican lawmakers skipping the convention as one major reason financial executives don’t feel the need to raise the flag in Cleveland.

So far, no major Wall Street CEOs have said they plan to attend the convention. JPMorgan Chase, which played a sponsorship role in 2012, declined to do so this year. Goldman Sachs will also be largely absent, as will Morgan Stanley and Bank of America. Citigroup plans only a low-key presence.

United Wholesale rolls out its 1% down program

The company provides eligible homebuyers with a 2% lender-paid down payment that gives consumers a 3% equity at closing.

“The 1% down program we’re introducing is a new alternative to the 3% down programs that already exist,” UWM President and CEO Mat Ishbia said. “It’s a conventional loan that is designed for people with a strong credit payment history who want to keep as much money in their wallet as possible when buying a home.”

“By introducing this conventional 1% down program to the wholesale space, we’re equipping mortgage brokers with a distinct competitive advantage in the market and a new way to help borrowers realize homeownership,” Ishbia said.

A Canadian man was pulled over and questioned by police for “reading while black” for a couple of hours at a seaside wharf, he said.

Louizandre Dauphin, a small New Brunswick’s city’s director of parks, recreation and tourism, wrote on Instagram Thursday that an officer told him a few people in Janeville had reported “a suspicious black man in a white car.” The Royal Canadian Mounted Police officer did not arrest Dauphin or ask any more questions but stopped him long enough to verify his identification, he said.

“So, a black male, sitting in his car, reading a book is suspicious activity,” Dauphin, 33, wrote. “Good to know. At this rate, I may never leave my home again. #DangerousNegro.”

Dauphin had been reading books by C.S. Lewis and the pastor and author Timothy Keller at the Stonehaven Wharf in an effort, he said, “to pacify my mind” after a week marked by police shootings of African-Americans and protests. He shared the story of the encounter in a post with a selfie of him showing his baffled reaction afterward.

Can a Debt Collector Restart the Clock on My Old Debt?

You have a very pleasant phone call with a debt collector. The person begs you to send in a just a small sum, say $10, to settle the payment and promises to never bother you again. Suddenly, you get a new bill with the date of the collection account reset to the current date. Is it legal?

“You send in that $10, and that starts the statute of limitations all over again,” said Margot Saunders, counsel at the National Consumer Law Center. “Their promise is not enforceable.”

The statute of limitations on debt — how long a collector can sue you over a debt — varies by state. But that ticking clock can reset from the moment you pay part of it, or even if you say the wrong thing over the phone.

In some states, if debt collector calls the consumer and asks, “Do you admit that you owe this debt and you’re just refusing to pay it?” and the consumer says “Yes, I can’t pay it, but I agree I owe it.” That can count as a reaffirmation of the debt, which in some states restarts the statute all over again.

What should a consumer say?

“‘I don’t agree I owe it,'” said Saunders. “There’s no reason to ever have a friendly conversation with a debt collector. You don’t need to be rude, but you also don’t need to give them any information, whatsoever.”

One of our readers commenting on our site may have been caught in such a technicality:

I have a collection on an account from 2010. It has been dated at 2015 by the debt collection company. This is illegal or re-aging, isn’t it? What can I do? I live in Alabama and 6 years is the max from original date of the contract.

Recently, 32 Congressional Democrats attempted to push the FHFA to allow Fannie Mae and Freddie Mac to rebuild their dwindling capital base, while a group of the largest trade organizations in housing said that their view is that “comprehensive reform to the secondary housing finance system must come through Congress,” rather than from the FHFA.

Up to this point, the FHFA and its director, Mel Watt, have not responded directly to these efforts, other than Watt’s inclusion in the Financial Stability Oversight Council’s annual report, in which the FSOC members stated that they too believe that Congress needs to take the lead on housing finance reform.

But now, Watt is responding directly to those public salvos, albeit much more quietly than the trade groups or the politicians.

Watt’s response was not made public, but it was revealed by the Wall Street Journal’s Nick Timiraos, who tweeted out a copy of the letter. 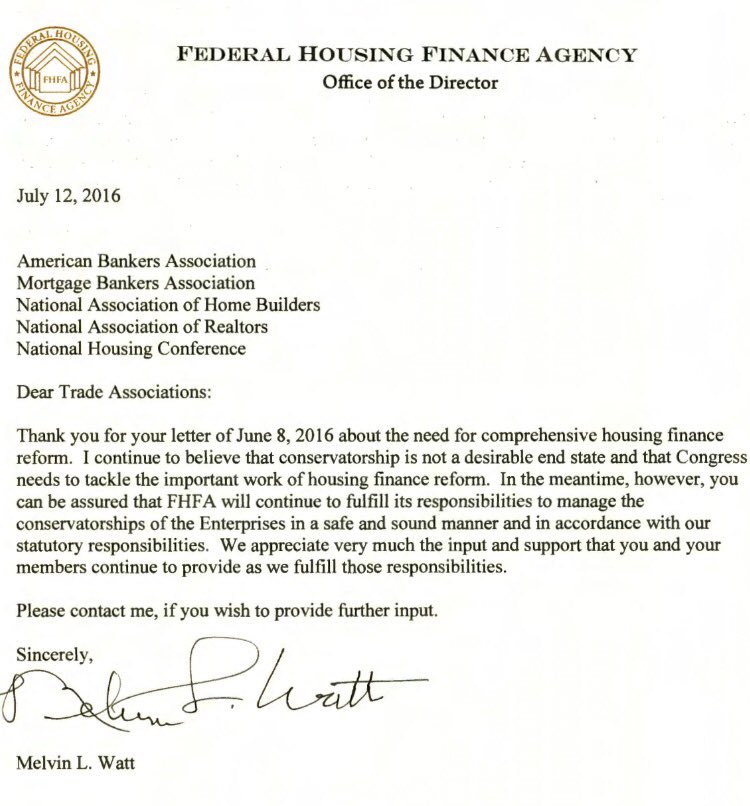