Edward Snowden, America’s #1 fugitive, would not only get a full pardon under a Jill Stein administration, but would get a promotion to one of the highest levels of government.

“[Snowden] has done an incredible service to our country at great cost to himself for having to live away from his family, his friends, his job, his network, to basically live as an expatriate,” Stein said during a livestreamed town hall with supporters on her Facebook page.

“I would say not only bring Snowden back, but bring him into my administration as a member of the Cabinet, because we need people who are part of our national security administration who are really, very patriotic,” Stein continued. “If we’re really going to protect American security, we also have to protect our Constitutional rights, and that includes our right to privacy.”

Jill Stein is on the ballot in 23 states so far according to her website: 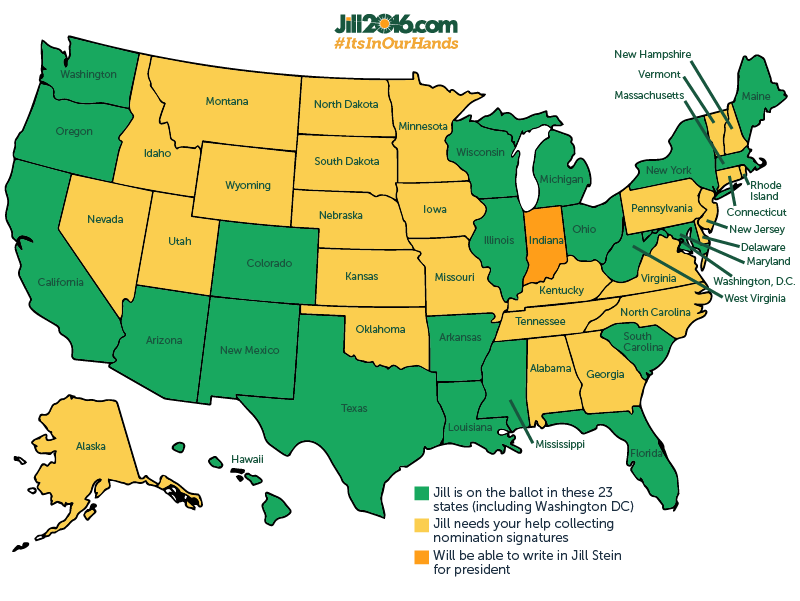 And Stein is trying to get on the ballot in Vermont. She was in Vermont Friday campaigning on Sanders’ turf. The state of Vermont has been a blue state for quite some time. It will be tough for Trump to flip the state to red since alot of Vermonters don’t like Trump’s rhetorics. But the real question is can Stein gather those Sanders supporters that dislike Clinton now that Sanders endorsed Hillary Clinton? Remember Stein is currently not on Vermont ballot but Libertarian Presidential candidate Gary Johnson is on Vermont ballot. Will any Sanders supporter jump on the Johnson train? So, the state of Vermont is up for grabs for votes for all political parties. The big question is who will win the state of Vermont. The interesting thing is in Vermont that the Vermont voters have the freedom to not vote Democrat. Their choice of parties other than Democrats are Progressive, Republican, Libertarian, and Liberty Union. Sen. Sanders was part of member of the Liberty Union Party, which originated in the anti-war movement and the People’s Party before the year 1979 according to Wikipedia. Of course, he left the Liberty Union Party. A fun fact that from Wikipedia:

The Vermont Progressive Party originated with the independent campaign of Bernie Sanders for mayor of Burlington(previous to being elected mayor Sanders was a leader in the VT Liberty Union Party). Sanders, who was later elected to the United States House of Representatives,[1] and subsequently to the United States Senate,[2] never officially associated himself with the Progressive Party, although the Progressives were among his biggest supporters. Of course, Sanders ran Independent for Mayor as well as for Congress and Senate. Sanders running Independent is not the same as being part of American Independent Party. For example, here is the voting results of Sanders running as an Independent in the mayoral race. And here is the definition of Independent:

Individuals who run for and serve in office as “Independent” are not affiliated with any political party, either by personal preference or due to not being nominated by the party of their choice. It is similar to the “Nonpartisan” label which is normally used during elections in which political parties play no role.

Like I said, this Presidential race will be ugly, expensive, and competitive.And the third party candidates Jill Stein and Gary Johnson are going to fight for every vote and deny this Presidential race to be determined as a two party race between Hillary Clinton and Donald Trump. It is up to the voters to decide who is the candidate with the best platform of issues that they feel can lead this country after Obama leaves.