CfA asks Sen. Corker to recuse himself from Wells Fargo hearing because of his long financial relationship with the bank

CfA Executive Director Anne Weismann stated, “While many senators on both sides of the aisle have pilloried Wells Fargo for its reprehensible treatment of consumers, Sen. Corker’s comments have been tepid.  Perhaps this is because of his long financial relationship with the bank.”

In 2014, Sen. Corker invested in a 650,000-square foot shopping center development in Mobile, Alabama called McGowin Park, a joint venture by a Chicago-based developer, and the Hutton Company, a construction company based in Chattanooga owned by Karen Hutton a former executive of CBL & Associates. Six days after making that investment, McGowin Park disclosed it had secured a loan from Wells Fargo to finance the development, which is projected to generate $200 million in annual revenues.  The value of Sen. Corker’s stake likely increased after the announcement.

In addition, Wells Fargo is also a major lender to CBL & Associates, a Chattanooga real estate investment trust with which Sen. Corker has had a well-documented long and close relationship.  Sen. Corker once worked with CBL, and its executives have been some of his chief supporters.  Sen. Corker also has traded heavily and to significant profit in CBL’s stock.  Last fall, CfA asked the Securities and Exchange Commission and the Department of Justice to investigate whether Sen. Corker had engaged in insider trading.  News reports have indicated such an investigation is ongoing.

CBL executives have regularly referred to their firm’s special relationship with Wells Fargo, referring to it as the company’s “lead bank” and noting that it helped prop up the firm during the 2008 financial crisis.

Another senator with ties to the bank is Senate Majority Leader Mitch McConnell (R-KY).  His wife, Elaine Chao, sits on Wells Fargo’s board of directors.

SAN DIEGO (CN) — Republican presidential nominee Donald Trump pressed a federal judge Monday to allow him to call former Trump University students not part of a class action to the witness stand later this year.
Trump wants U.S. District Judge Gonzalo Curiel to let him call a handful of former students from his now-defunct real estate school to testify about their positive experiences. The request comes a little less than two months before the trial in Low v. Trump University kicks off in San Diego Federal Court following the Thanksgiving holiday.
In a short and sweet order last week, Curiel said he would not postpone the post-election trial date to accommodate a scheduling conflict for Trump’s lead attorney Daniel Petrocelli, giving the go-ahead for the first of three Trump University lawsuits to go to trial.
Sonny Low and the others sued Trump long before he launched his presidential bid, claiming they were duped into paying upwards of $35,000 on the promise they’d learn insider real estate secrets from instructors “handpicked” by Trump himself.

Sen. Sanders to OCC and CFPB: Have Any Criminal Inquiries in Wells Fargo Case Been Filed? 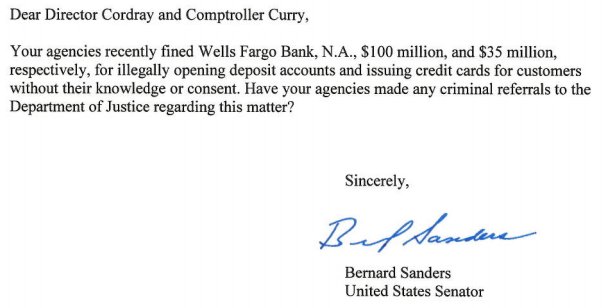 Here is Sanders’ letter to the heads of CFPB and OCC. To read the letter, click here.

Tagged CFPB, Office of the Comptroller of the Currency, Wells Fargo

Bitcoin qualifies as money, a federal judge ruled on Monday, in a decision linked to a criminal case over hacking attacks against JPMorgan Chase & Co and other companies.

U.S. District Judge Alison Nathan in Manhattan rejected a bid by Anthony Murgio to dismiss two charges related to his alleged operation of Coin.mx, which prosecutors have called an unlicensed bitcoin exchange.

Murgio had argued that bitcoin did not qualify as “funds” under the federal law prohibiting the operation of unlicensed money transmitting businesses.

But the judge, like her colleague Jed Rakoff in an unrelated 2014 case, said the virtual currency met that definition.

Why Wells Fargo Debacle Is Cautionary Tale for Bank Boards

Wells Fargo’s directors are not the first to learn this lesson. Every bank director in America ought to read detailed analyses of bank failures and big losses like the London Whale. What they would see is that TGTBT performance is a factor common to failure and losses.

Directors would also see repeated patterns where banks justified extraordinary performance because “this time is different” and “we’re just smarter than other banks.” Neither prove true over time.

Second, Wells Fargo is a case study in a systemic problem plaguing US banks: Few directors have the hands-on experience and detailed knowledge needed to govern a bank. History shows that bank directors struggle to identify TGTBT performance. Or when identified, the directors too often lack the detailed knowledge of banking to challenge management’s perspective on performance.

Only one of Wells Fargo’s 14 nonexecutive directors had experience in commercial banking prior to being appointed to the board. By the way, the person with the banking experience did not join the board until 2015. In contrast, the other 13 directors had an average time on the board of 11 years.

Wells’ board is not alone among banks suffering from a lack of industry expertise.

Wells Fargo Chairman and CEO John Stumpf continues to blame everyone else for the opening of unauthorized accounts and he absolutely has to go, shareholder rights activist Gerald Armstrong said Monday.

Armstrong also wants to see a shake-up of the board of directors.

“I think it should be rejuvenated, reactivated and made into a very intense entity that is monitoring the managing of the corporation. That is a board’s duty,” he said in an interview with CNBC’s “Closing Bell.”

Armstrong has a “significant” personal investment in the company.