Posted on December 4, 2016 in Uncategorized

And Carrier is still shipping 1,000 jobs to Mexico while Indiana taxpayers have to fork up money for Carrier over 10 years… Heckava job, Donald…

Why is Trump on a victory tour? Carrier got a taxpayer funded handout and Indiana still lost 1,000 jobs. pic.twitter.com/Wav1OlXDmy 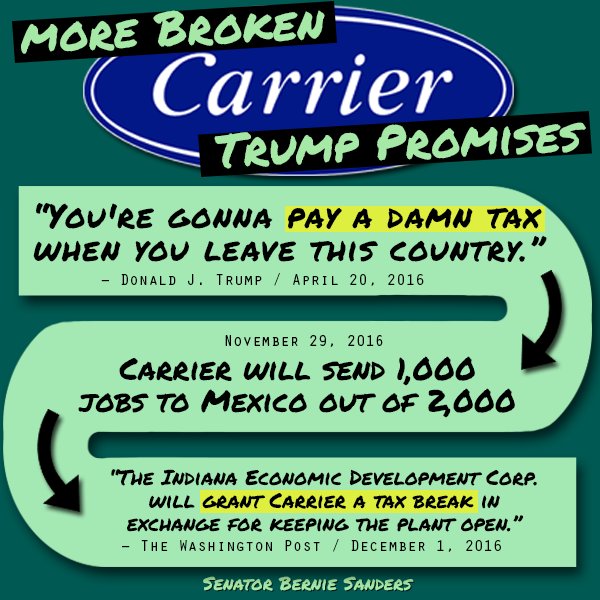 In particular, the bank’s Financial Freedom unit, which issued reverse mortgages mostly to elderly homeowners borrowing against their home’s equity, has foreclosed on at least 16,200 of these loans since 2009, according to other data obtained by the California Reinvestment Coalition. That makes up nearly 40 percent of all foreclosures on reverse mortgages in that time period even though it served just 17 percent of the market. The unit has caught the eye of the Department of Housing and Urban Development’s Office of Inspector General, which has launched an investigation into it.

One such homeowner is Rex Schaffer, an 86-year-old resident of California.As he told NPR, he and his wife took out a home equity loan on their home of nearly 50 years but had a hard time affording the payments. They qualified for three different government-assisted modifications to make it easier to afford, they say, but OneWest never changed the terms of their loan, even though Rex says he contacted 33 different employees.

As their house was about to be sold in an auction, Rex says he finally got through to a bank vice president who offered a 60-day extension on the sale — only to have the house sold the next day, unbeknownst to them. “We didn’t even know it — didn’t have the faintest idea,” Rex told NPR.

Another is Leslie Parks, who came back to her home in Minnesota from work one day in 2009 to find her locks changed. Her mother had years earlier refinanced a fixed-rate mortgage to an adjustable-rate one that could go up at any time with OneWest. When Parks was locked out of her house, she was in the middle of trying to get a loan modification from the bank.

Yet another is Rose Gudiel, who tried for two years to get OneWest to modify her loan after she was furloughed at work a number of times and her brother was killed. She says the bank refused and instead put her house into foreclosure. “I have the money to pay for my home,” she told the Pasadena Star-News. “All I want is for the bank to let us keep our home.” Her story inspired a march of about 100 people to protest in front of Mnuchin’s home in 2011.

The bank was also accused by employees of encouraging fraudulent behavior. A Texas employee said in a 2009 deposition that she was forced to partake in what became dubbed “robo-signing,” or mortgage officials signing off on foreclosures without verifying information or giving the documents an in-depth look. She said she signed 750 such affidavits and documents a week, spending just 30 seconds on each. A later review found that nearly 11,000 borrowers, or 5.6 percent of all its borrowers, were due remediation for such practices.

Bankrolling other people’s court fights dates to the Dark Ages, when it was a favorite tactic of noblemen who wanted to harass their enemies. In recent years litigation funding has become a multibillion-dollar industry as investors have quietly fronted the costs of civil suits in exchange for a piece of any eventual monetary awards. The billionaire investor Peter Thiel turned the practice into a tool of revenge this year, surreptitiously paying for pro wrestler Hulk Hogan’s privacy suit against the website Gawker, which published a Hogan sex tape. The case went to trial and ended with a $140 million jury verdict that pushed the site into bankruptcy. Thiel subsequently said he got involved because of a 2007 Gawker story outing him as gay.

Federal judges in California may be about to deal the business a serious blow. In June the rules committee of the U.S. District Court in San Francisco proposed that any party to a lawsuit filed in the jurisdiction would have to disclose any financial support from third-party sources known as litigation funders. The next step is for the full court to consider the question.

In remarks that appeared to pre-empt President-elect Donald Trump, who has promised to roll back Wall Street regulations, New York Fed President William Dudley said much progress has been made making the financial system “less prone to panics.”

“Still,” he said in prepared remarks, “there is more to do before we can say that we have ended ‘too big to fail.’ This is work that we absolutely must complete.”

Dudley’s comments, to a Group of 30 meeting of top world regulators, came a day after another powerful regulator at the U.S. central bank, Daniel Tarullo, also warned against “backsliding” after years of implementing the landmark 2010 Dodd-Frank financial-reform law.

Challenges especially remain in regulators safely and smoothly handling the hypothetical failure of a massive bank with operations in multiple jurisdictions, Dudley said.