The letter that Trump doesn’t want you to read… The Carrier letter was posted to Twitter by Indianapolis-based journalist Rafael Sánchez. 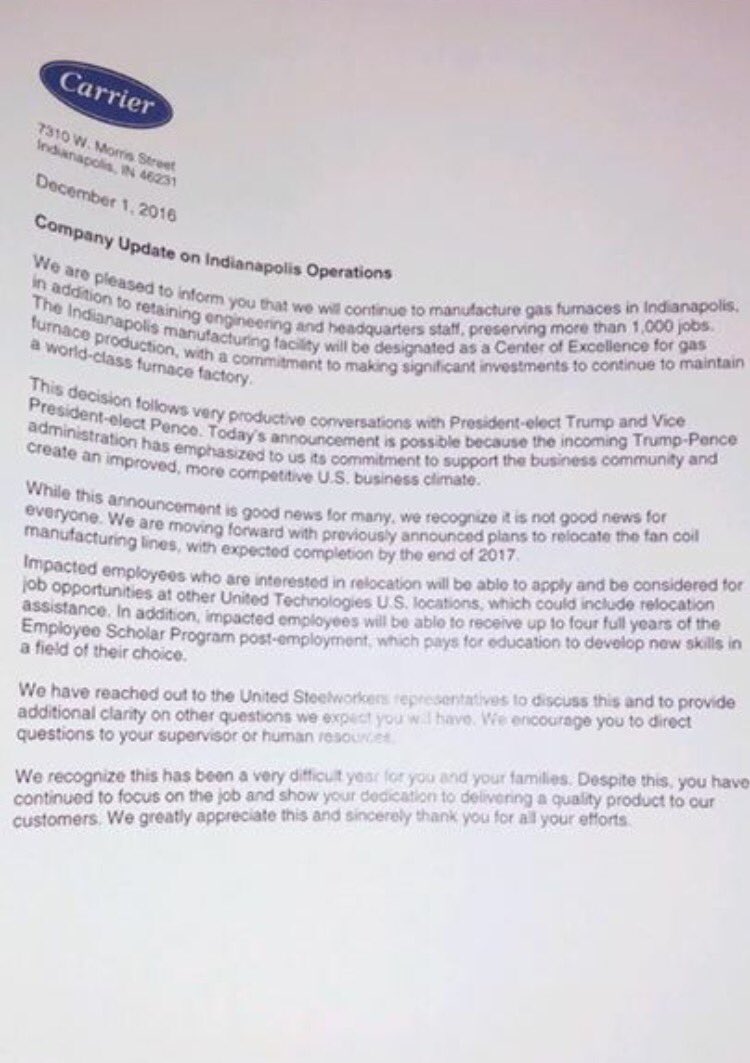 The allegation came in a filing Wednesday in a Manhattan federal court lawsuit filed in 2014 by individuals and entities that bought or sold futures contracts.

According to the plaintiffs, records surrendered by Deutsche Bank show traders and submitters coordinating trades in advance of a daily phone call, manipulating the spot market for silver, conspiring to fix the spread on silver offered to customers and using illegal strategies to rig prices.

On the side note: While Oklahoma AG,Oklahoma was the lone maverick in national mortgage settlement signed by 49 states.

DONALD TRUMP ANNOUNCED Wednesday that he wants the Environmental Protection Agency to be run by Oklahoma Attorney General Scott Pruitt, a longtime ally of the oil and gas industry who has led litigation efforts to overturn the EPA’s rules to address climate change.

As a state attorney general, Pruitt was caught sending a letter to regulators that was drafted by lobbyists working for Devon Energy, a major drilling company. As Pruitt joined a lawsuit against rules opposed by the fracking industry, he simultaneously courted industry donors, including billionaire fracking executive Harold Hamm, who served as the co-chair of Pruitt’s 2013 election campaign.

Pruitt has questioned the role of human-made pollution in causing climate change, writing for the National Review this year that the “debate is far from settled.”

The Pruitt announcement was by immediately criticized by environmentalists. Sen. Bernie Sanders criticized the nomination of “a climate change denier” who “has worked closely with the fossil fuel industry to make this country more dependent, not less, on fossil fuels.” Robert Verchick, the president of the Center for Progressive Reform, called the pick “a clear indication that the administration plans a full-throated assault on environmental protections.”

The dark clouds surrounding Wells Fargo are about to get a lot darker, as the bank, which is already in hot water over its recent fake account scandal, is reportedly falling short in its fair lending requirements and faces additional sanctions.

Over the last few months, Wells Fargo has been in the crosshairs of various regulators after the Office of the Comptroller of the Currency, the Consumer Financial Protection Bureau and the city and county of Los Angeles fined Wells Fargo $185 million because more than 5,000 of the bank’s former employees opened approximately 2 million fake accounts in order to get sales bonuses.

In the fallout from the fake account scandal, Wells Fargo CEO John Stumpf lost his job, the bank lost business from several states, and the OCC slapped additional sanctionson it, including forcing the bank to ask the OCC for approval if it wants to make a change to its board of directors or its senior executive officers.

Now, according to a new report from Reuters, Wells Fargo is about to be more hot water with the OCC for reportedly failing to meet its requirements under the Community Reinvestment Act.

Under the Community Reinvestment Act guidelines, banks are legally required to meet the credit needs of low- and moderate-income communities.

Wells Fargo is due to be deemed a bank that “needs to improve” under the Community Reinvestment Act (CRA), a law meant promote fair lending.

The move is a two-notch downgrade from the “outstanding” tag Wells Fargo has held since 2008 and the change would give regulators a greater say on day-to-day matters like opening new branches.

“Stephen Alpher” over at Seeking Alpha published a quick write-up of the new Wells CEO’s activity this morning and it’s not very assuring.

So, did the new CEO of Wells just prove he learned nothing from previous CEO’s ouster?

Here’s proof in 3 points, going by the Seeking Alpha post:

1. Says he opposes changing sales incentives. (CFPB warns banks not to do this.)
2. Not concerned with accounts-scandal fines. (Depsite OCC sanctions for this.)
3. Numbers don’t add up. Says credit cards are up when actually down at the bank.

On Monday, the first day of the new legislative session in the unofficial capital of liberal America, California Assembly Speaker Anthony Rendon was defiant in his opposition to Donald Trump. “Unity must be separated from complicity,” Rendon thundered. “Californians do not need healing. We need to fight.”

The legislature kicked off that fight with a mostly symbolic resolution urging Trump “to not pursue mass deportation strategies” that one lawmaker likened to ethnic cleansing. Other bills introduced Monday seek to fund grants for legal representation for immigrants facing deportation, train public defenders in immigration cases, prohibit state agencies from delivering information that could be used to create a registry of Muslim Americans, force any border wall in environmentally sensitive areas to obtain voter approval, and terminate contracts with privately run immigrant detention facilities.

But despite the whirlwind of action, the leader of the state’s resistance against Trump will possibly not work in the Capitol rotunda but in the state’s Department of Justice.

Last week, Governor Jerry Brown tapped Congressman Xavier Becerra for attorney general, an appointment made necessary after current AG Kamala Harris won election to the Senate. This may be the most vital appointment of the transition period, and it wasn’t even Trump’s. The California attorney general is well-positioned to thwart the conservative agenda, a model we’ve seen in reverse throughout the Obama administration.