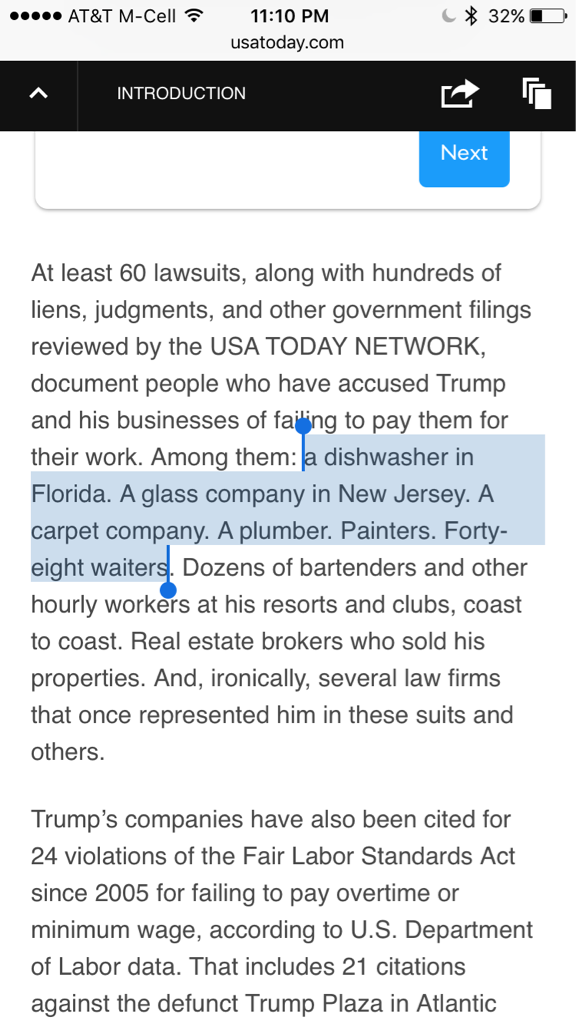 Reminder: hundreds of people have alleged Trump stiffed them… including a dishwasher, a plumber, and 48 waiters. http://www.usatoday.com/story/news/politics/elections/2016/06/09/donald-trump-unpaid-bills-republican-president-laswuits/85297274/ …

Congresswoman Maxine Waters is the first in Congress to address David Dayen’s Mnuchin story. Says it disqualifies him 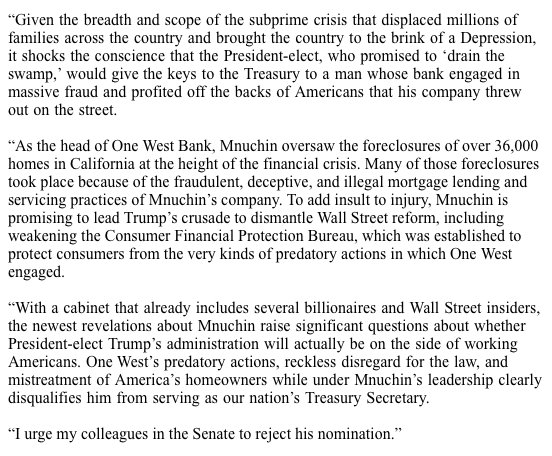 Posted on January 7, 2017 in Uncategorized

Federal Reserve governor Daniel Tarullo met in September with Wells Fargo & Co. Chief Executive John Stumpf shortly after the bank settled with regulators over its use of unauthorized accounts, according to calendars released by the Fed on Friday.

Mr. Tarullo met twice with J.P. Morgan Chase Chief Executive James Dimon in September and October, the calendars show. The first meeting between Messrs. Tarullo and Dimon, on Sept. 13 of last year, was the first in a series of meetings with large bank chief executives. He spoke with James Gorman, the CEO of Morgan Stanley, and Mr. Stumpf the following day. Messrs. Tarullo and Dimon met again on Oct. 5.

After tapping several Goldman Sachs Group Inc. alumni for senior economic posts, President-elect Donald Trump?s team is considering yet another for a key job at the Treasury Department.

Jim Donovan, a senior Goldman Sachs private banker, is under consideration to be the U.S. Treasury Department?s undersecretary for domestic finance, according to people familiar with the matter.

The choice isn?t yet final and could change, these people said. Attempts to reach Mr. Donovan on Friday were unsuccessful. Mr. Trump?s transition team didn?t respond to a request for comment.

Mr. Donovan?s nomination likely would inflame Democrats and liberal groups, which already have been critical of other Trump nominees with ties to the financial sector. Earlier this week, a few dozen protesters sought access to the lobby of Goldman?s lower Manhattan headquarters protesting the bank?s influence in politics.

The U.S. Labor Department says an attorney representing Wells Fargo & Co. tried to hamper an investigation into the bank’s treatment of employees and in doing so cited a possible role in the coming Trump administration, according to a letter reviewed by The Wall Street Journal.

The Labor Department probe is focused on whether Wells Fargo skirted overtime rules, among other potential labor issues, in a bid to meet lofty sales goals. The agency began its inquiry after the San Francisco bank in September agreed to a $185 million regulatory settlement and enforcement action for illegal practices that included employees opening accounts without customers’ knowledge.

The Labor Department said in a mid-December letter that an outside attorney for the bank, Tammy McCutchen, tried to block an agency investigator from accessing records or conducting interviews at a Wells Fargo facility in Concord, Calif.

The Department of Housing and Urban Development announced Friday that it is charging Bank of America and two of its employees with discriminating against Hispanic mortgage borrowers.

The charges stem from a complaint filed by the National Fair Housing Alliance, which conducted a series of “secret shopper” tests where Hispanic and non-Hispanic individuals, posing as prospective mortgage borrowers, attempted to get a mortgage from a Bank of America branch in Charleston, South Carolina.

Trump says U.S. taxpayers might fund his promised border wall — but Mexico will totally pay us back

President-elect Donald Trump is still two weeks away from his inauguration, but he’s already backpedaling on one of his biggest campaign promises: to make Mexico pay for the construction of a massive wall along America’s southwest border.

Multiple reports emerged late Thursday evening and early Friday morning, citing unnamed officials from Trump’s transition team, that U.S. taxpayer dollars could be used to extend the fence that already exists along more than 650 miles of the border.

Trump took to Twitter Friday morning to insist that Mexico would reimburse the U.S. for any money spent on the project, which has been projected to cost anywhere from $8 billion to more than $25 billion, depending on the design and location of the structure.

The dishonest media does not report that any money spent on building the Great Wall (for sake of speed), will be paid back by Mexico later!

According to declassified report, Russians not only influenced the Presidential election but hacked local and state election board

The agencies agree that Putin ordered an “influence campaign” for our elections, and as it progressed, there was a clear preference for Donald Trump over Hillary Clinton. They used state media, sock puppets on social media, and of course, Wikileaks to exert influence.

The goals, according to the report, were to “undermine faith in the U.S. democratic process, denigrate Secretary Clinton, and harm her electability and potential presidency.” It also concludes that “Putin and the Russian Government developed a clear preference for President-elect Trump.”

There are other disturbing conclusions in the report, particularly with regard to the hacks on local and state election boards.

“The Kremlin’s campaign aimed at the US election featured disclosures of data obtained through Russian cyber operations; intrusions into US state and local electoral boards;and overt propaganda,” the report states.

On a chilly December afternoon in Atlanta, a judge told Reiton Allen that he had seven days to leave his house or the marshals would kick his belongings to the curb. In the packed courtroom, the truck driver, his beard flecked with gray, stood up, cast his eyes downward and clutched his black baseball cap.

The 44-year-old father of two had rented a single-family house from a company called HavenBrook Homes, which is controlled by one of the world’s biggest money managers, Pacific Investment Management Co. Here in Fulton County, Georgia, such large institutional investors are up to twice as likely to file eviction notices as smaller owners, according to a new Atlanta Federal Reserve study.

“I’ve never been displaced like this,” said Allen, who said he fell behind because of unexpected childcare expenses as his rent rose above $900 a month. “I need to go home and regroup.”