An email obtained by ThinkProgress tells employees not to discuss work on their social media.

Employees working in a Department of Energy solar program were ordered this week not to share anything about their work on private or professional social media accounts, ThinkProgress has learned.

The directive was given at a staff meeting, according to the email sent Thursday morning, and came from Assistant Secretary of Energy Efficiency and Renewable Energy Steven Chalk. Another employee confirmed the email’s authenticity.

“I want to share that we are PROHIBITED from any social media post (from personal or business handles) regarding your work, attendance at any meeting, etc until further notice, per Steve Chalk, acting EE-1,” the email reads. The email was sent from a member of the solar program, known as SunShot, to roughly 50 staff members of the same group.

Chalk has been prohibited from speaking with reporters until the department is fully staffed with political appointees, according to the person who answered the phone at his office Thursday.

A spokesperson for the Department of Energy said she had no knowledge of the directive and denied that it was departmental policy. “It was not a departmental directive. I don’t know what EERE might be doing on their own,” the spokesperson said. “We are business as normal throughout the department.”

While thousands of people are protesting nationwide today, Trump is watching Finding Dory 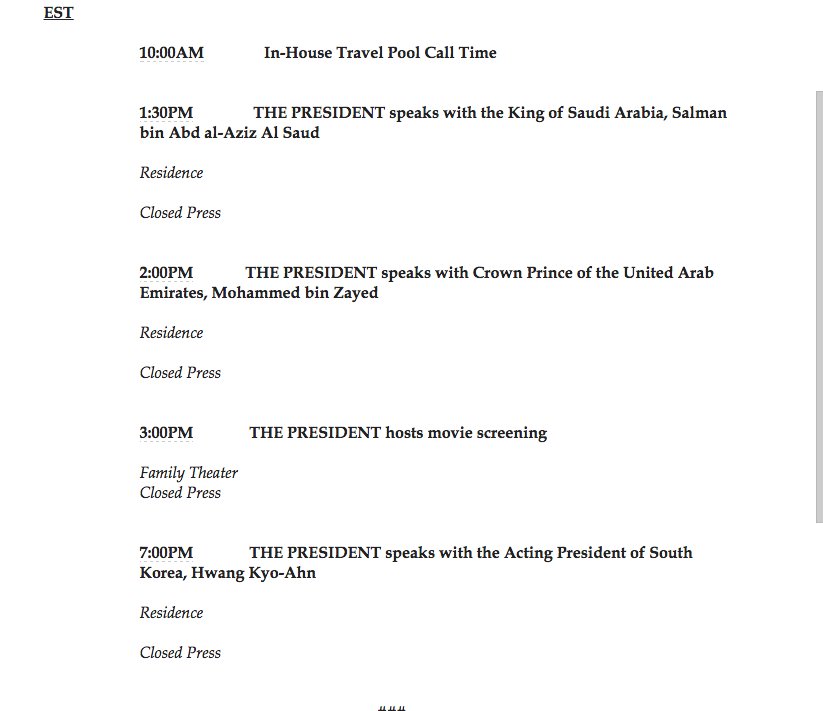 The operating committee of JPMorgan Chase & Co., the nation’s biggest bank, emailed a statement to its staff on Sunday afternoon, expressing an “unwavering commitment” to its employees, adding that all of its employees who have come to the U.S. “have adhered to our country’s immigration and employment processes.”

JPMorgan Chase’s operating committee includes its CEO, Jamie Dimon, who is one of the most respected leaders on Wall Street. Dimon has not made any other statement indicating his views on the executive order Trump signed on Friday. The email said that JPMorgan Chase had worked over the weekend with its employees on sponsored visas who are potentially impacted by the executive order.

“We understand that our country, economy and well being are strengthened by the rich diversity of the world around us, where we are dedicated to serving customers and communities in more than 100 countries every day,” the JPMorgan Chase email said.

JPMorgan just landed a $1 trillion win in a growing business

State Street’s pain has turned out to be JPMorgan’s gain.

BlackRock, the world’s largest asset manager, announced that it would move over $1 trillion of its assets from the custody of State Street to its rival JPMorgan to cut costs for clients. JPMorgan said it expected to take charge of BlackRock’s assets over the next two years.

“We think the transfer was triggered by a better overall value proposition from JPMorgan for both Blackrock’s clients and Blackrock corporate, which includes both pricing and client service,” Credit Suisse said in a note responding to the news.

President Trump has signed an executive order that bans citizens from seven Muslim-majority countries in the Middle East from entering the United States for 90 days, according to the White House. His proposed list doesn’t include Muslim-majority countries where his Trump Organization has done business or pursued potential deals. Properties include golf courses in the United Arab Emirates and two luxury towers operating in Turkey.

He has business interests in about 20 countries. The Trump Organization has said it has ended some deals since the election.

An ex-KGB chief suspected of helping the former MI6 spy Christopher Steele to compile his dossier on Donald Trump may have been murdered by the Kremlin and his death covered up. it has been claimed.

Oleg Erovinkin, a former general in the KGB and its successor the FSB, was found dead in the back of his car in Moscow on Boxing Day in mysterious circumstances.

Erovinkin was a key aide to Igor Sechin, a former deputy prime minister and now head of Rosneft, the state-owned oil company, who is repeatedly named in the dossier.

President Donald Trump’s nominee for U.S. treasury secretary was untruthful with the Senate during the confirmation process, documents uncovered by The Dispatch show.

But records show the bank utilized the questionable practice in Ohio.

“The guy is just lying. There’s no other way to say it,” said Bill Faith, executive director of the Coalition on Homelessness and Housing in Ohio.

The revelation comes with the committee’s vote on whether to confirm Mnuchin’s nomination, currently scheduled for Monday night.

California is among a handful of so-called “donor states,” which pay more in taxes to the federal Treasury than they receive in government funding.

SAN FRANCISCO (KPIX 5) – The state of California is studying ways to suspend financial transfers to Washington after the Trump administration threatened to withhold federal money from sanctuary cities, KPIX 5 has learned.

Officials are looking for money that flows through Sacramento to the federal government that could be used to offset the potential loss of billions of dollars’ worth of federal funds if President Trump makes good on his threat to punish cities and states that don’t cooperate with federal agents’ requests to turn over undocumented immigrants, a senior government source in Sacramento said.