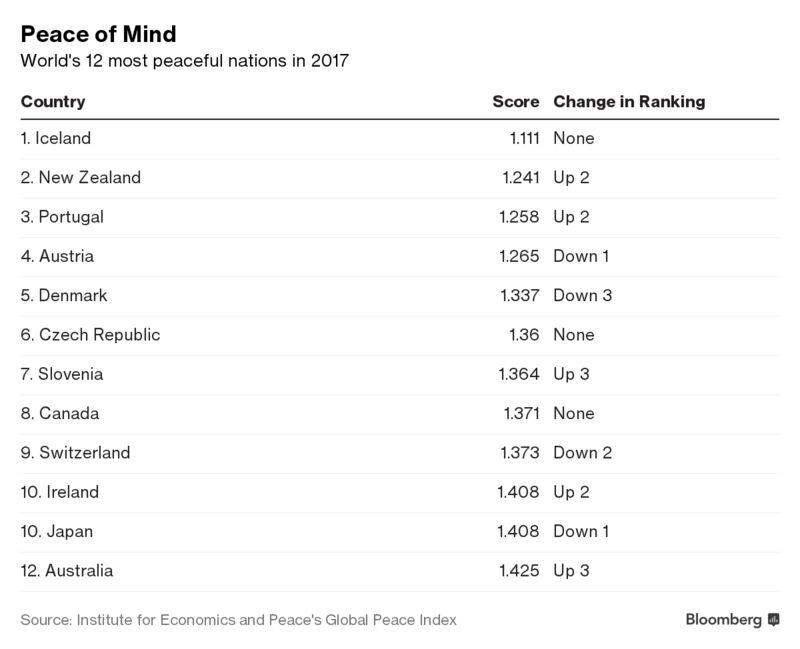 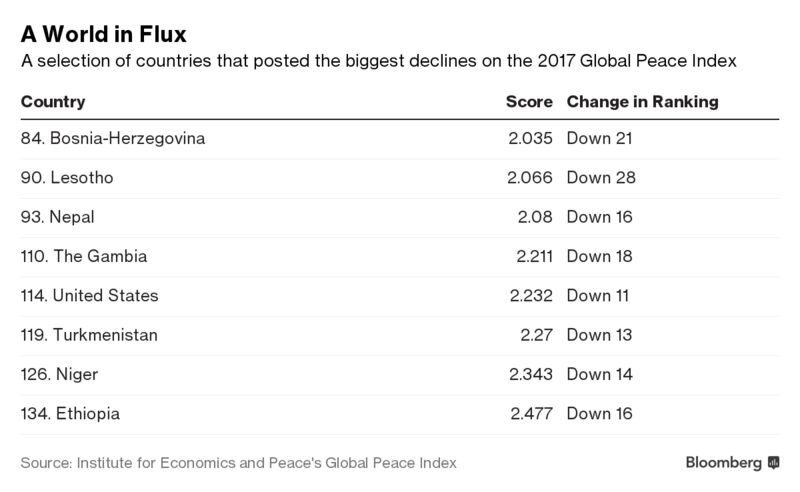 The U.S. dropped 11 places to the 114th most-peaceful country out of 161 in the index published by The Institute of Economics and Peace, which has offices in Sydney, New York, The Hague, and Mexico City.

The call comes from Debbie Wasserman-Schultz’s district office and the person uses voice changer according to the phone number from the caller ID that was captured from the Notice of Filing by the plaintiffs’ attorneys on page 6.And who is that person who called? This is pretty bad.This case has gotten strange. The judge in this case has his work cut out. Regardless, the court will likely investigate where the call came from:

And the Defendants filed response. Wasserman’s attorneys deny the call was made from her office and that they have referred the matter to the U.S. Capitol Police to investigate possible fraud in someone trying to impersonate Wasserman Schultz’s office:http://jampac.us/wp-content/uploads/2017/06/56-D.E.-56-Ds-Reply-to-Ps-NOF-Email-6-2-17.pdf

BERKELEY — The city will continue to do business with Wells Fargo at least through May 2018 as it develops “socially responsible banking” criteria for future bidders. That could ultimately include the beleaguered San Francisco-based bank, notwithstanding Berkeley’s “Not Welcome” signal.

The City Council approved a resolution May 30 calling on the council and the Mayor’s Responsible Banking Task Force to work with City Manager Dee Williams-Ridley to develop the criteria for a Request For Proposals to be published in December.

Once upon a time, in 1970, long before America’s banking system was dominated by six giant institutions—JPMorgan Chase, Bank of America, Wells Fargo, Citigroup, Goldman Sachs, and Morgan Stanley—Dennis Hambek started working as a messenger at the National Bank of Washington in Ellensburg, Washington. Over the years, as his career advanced from messenger to loan officer to branch manager, he had a front-row seat at the transformation of America’s banking system. That first year, the National Bank of Washington was swallowed up by Pacific National Bank of Seattle, which in 1981 was bought by Los Angeles-based First Interstate Bancorp, which in 1996 was bought by San Francisco-based Wells Fargo, which in 1999—as the consolidation frenzy was reaching its peak—merged with Norwest, a Minneapolis-based bank, in a $34 billion deal.

Wells Fargo, which was founded in 1852 as a stagecoach express to carry valuable goods to and from the gold mines in the West, had a storied brand, so the new, combined company kept that name. But if Norwest’s name didn’t survive, its corporate culture did. Spearheaded by the company’s then C.E.O., Dick Kovacevich, it involved a novel way of thinking about banking.

As Kovacevich told me in a 1998 profile of him I wrote for Fortune magazine, the key question facing banks was “How do you sell money?” His answer was that financial instruments—A.T.M. cards, checking accounts, credit cards, loans—were consumer products, no different from, say, screwdrivers sold by Home Depot. In Kovacevich’s lingo, bank branches were “stores,” and bankers were “salespeople” whose job was to “cross-sell,” which meant getting “customers”—not “clients,” but “customers”—to buy as many products as possible. “It was his business model,” says a former Norwest executive. “It was a religion. It very much was the culture.”