45th anniversary of the Watergate scandal 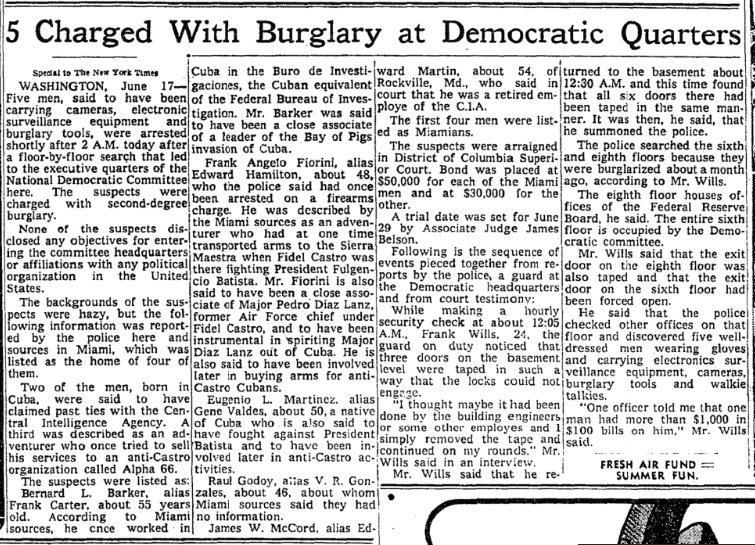 In the paper #OTD in 1972. Five men are arrested for breaking into the DNC offices at the Watergate Hotel. #nytimes pic.twitter.com/Pid5GZOpYe

The blockbuster deal by Amazon to purchase Whole Foods rocked financial markets on Friday. Grocery and retail outlet stocks were in a tailspinanticipating how the online shopping giant may move to swallow up the supermarket industry, particularly in the booming online sales market.

The massive $13.7 billion Amazon-Whole Foods merger may also invite government oversight regarding antitrust concerns, a dynamic complicated by potential conflicts of interest from officials tied to the merger.

Officials from both the Justice Department and the Federal Trade Commission, the two agencies charged with enforcing antitrust law, have financial ties to the law firms expected to play a major role in managing the deal.

President Donald Trump’s pick to lead the Justice Department’s antitrust division, Makan Delrahim, has worked since 2005 as a lawyer and lobbyist at Brownstein Hyatt Farber Schreck, a firm that is registered to lobby on behalf of Amazon.

Delrahim, who has worked on merger deals for over a decade and is viewed by legal observers as less likely to pursue aggressive antitrust enforcement as the previous administration, will be in office to review the Amazon-Whole Foods deal soon. He was nominated in March and was been cleared by the Senate Judiciary Committee this month, making his appointment imminent.

Delrahim, however, isn’t the only official with ties to the merger. Abbott Lipsky, appointed in March as the new acting Director of the FTC’s Bureau of Competition, which oversees antitrust, previously worked as a partner in the antitrust division of the law firm Latham & Watkins. Lipsky’s former law firm has been tapped by Whole Foods’ financial adviser, Evercore, to help manage the merger with Amazon, according to Law360.