Workers whose jobs are among 460 to be eliminated at a Bethlehem Wells Fargocall center are alleging in federal documents that the company is shipping their work overseas.

Three call center employees, Lou Falcone, Morgan Weinhold and Karrissa Arevalo, this week filed a petition for Trade Adjustment Assistance with the U.S. Labor Department, seeking additional job training and re-employment assistance through the federal program that is designed to help workers who lose their jobs due to the impact of foreign trade.

The workers’ petition is listed online as under investigation until the Labor Department makes a determination to certify or deny the request.

In the filing, the workers base their request on “CEO affirmation on various media outlets” of jobs being shipped overseas, as well as foreign job postings in their call center. The workers do not have listed telephone numbers and could not be reached for comment.

U.S. Commerce Secretary Wilbur L. Ross Jr. has a stake in a shipping firm that receives millions of dollars a year in revenue from a company whose key owners include Russian President Vladimir Putin’s son-in-law and a Russian tycoon sanctioned by the U.S. Treasury Department as a member of Putin’s inner circle.

Ross, a billionaire private equity investor, divested most of his business assets before joining President Donald Trump’s Cabinet in February, but he kept a stake in the shipping firm, Navigator Holdings Ltd., which is incorporated in the Marshall Islands in the South Pacific. Offshore entities in which Ross and other investors hold a financial stake controlled 31.5 percent of the company in 2016, according to Navigator’s latest annual report.

Among Navigator’s largest customers, contributing more than $68 million in revenue since 2014, is the Moscow-based gas and petrochemicals company Sibur. Two of its key owners are Kirill Shamalov, who is married to Putin’s youngest daughter, and Gennady Timchenko, the sanctioned oligarch whose activities in the energy sector, the Treasury Department said, were “directly linked to Putin.”

Another powerful owner is Sibur’s largest shareholder, Leonid Mikhelson, who controls an energy company that was also sanctioned by the Treasury Department for propping up Putin’s rule.

As commerce secretary, Ross has direct authority over trade and manufacturing policy and is an influential voice in the government on virtually any aspect of the U.S. economic relationship with other countries, including Russia. In recent years, tensions between the United States and Russia have escalated, with the United States imposing sanctions against Russia after its 2014 invasion of Crimea and its interference in the 2016 presidential election.

Explore The Influencers: Donald Trump’s allies in the Paradise Papers 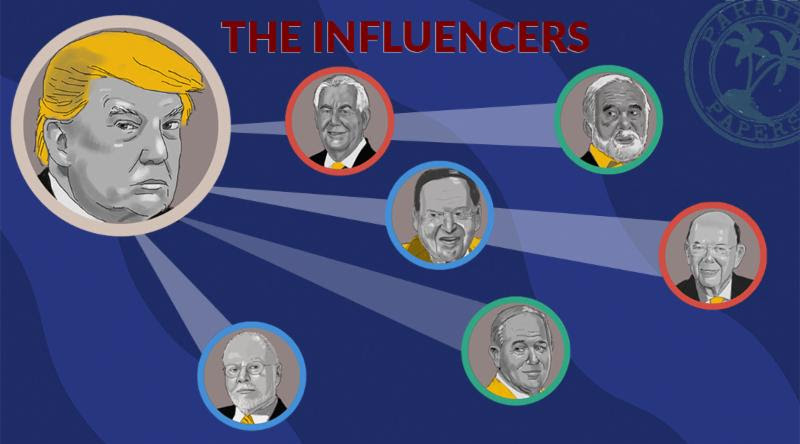