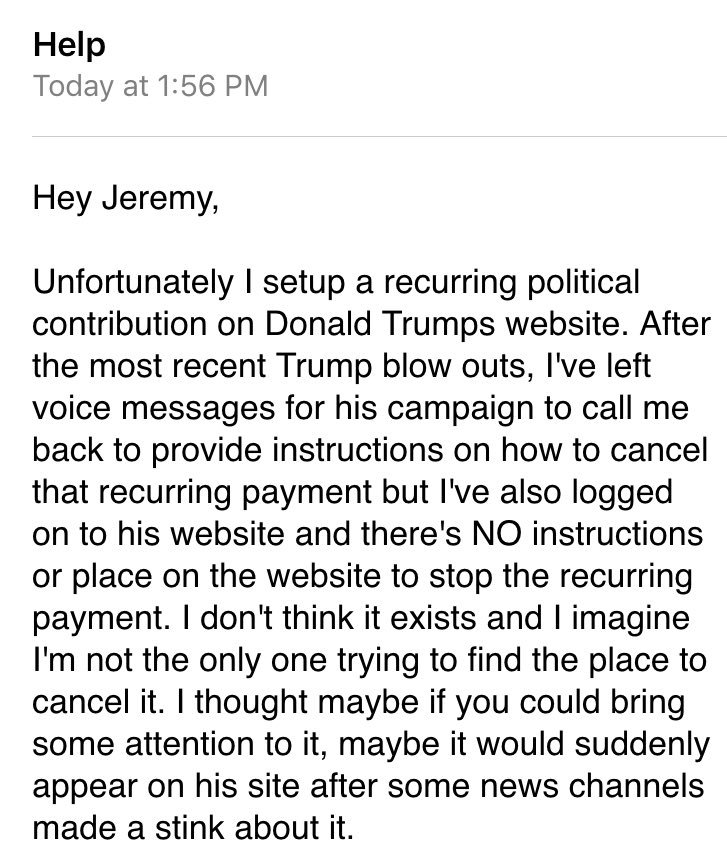 INBOX: Help, I set up a recurring contribution to Trump’s campaign & want to cancel it: (cc: @realDonaldTrump) pic.twitter.com/TFOHhdZDlJ

This is really scary...

You used to love Republican presidential nominee Donald Trump, but now you’ve had a change of heart — and want to cancel your recurring monthly donation to his campaign?

As the screenshots below demonstrate, there is no clear option on Trump’s website to cancel monthly contributions or remove your credit card information: The site layout makes it appear that once you’ve set up a donation, you may only switch from one valid credit card to another.

There is, actually, a way to cancel — but only if you register your account by setting a password and navigate through a labyrinthine process.

This design flaw first came to light Wednesday, when CNN reporter Jeremy Diamond tweeted a screenshot of an email from a disenchanted Trump donor who alleged that the campaign has not returned voice message requests to cancel contributions. (The identity of the alleged donor is not shown.)

And yes, the reporter went on Hillary Clinton’s campaign website, and there is information on her website to cancel payment. Read on the article. Click here.

Is the alcohol industry is spending money to get members of Congress to pay attention to the problem of “marijuana-impaired driving”? That’s the case being made on cannabis industry website Marijuana.com, where a blogger seems to have assiduously searched the famous WikiLeaks dump of DNC e-mails for any reference to our favorite herb.

What the blogger found was in the May 24, 2016 edition of Huddle, a daily e-newsletter for Capitol Hill insiders produced by the Politico website. That issue included a paid advertisement from the Wine & Spirits Wholesalers of America (WSWA), which reads in part:

While neutral on the issue of legalization, WSWA believes states that legalize marijuana need to ensure appropriate and effective regulations are enacted to protect the public from the dangers associated with the abuse and misuse of marijuana… In the years since the state legalized medicinal use, Colorado law enforcement officials have documented a significant increase in traffic fatalities in which drivers tested positive for marijuana… Congress should fully fund Section 4008 of the FAST Act (PL 114-94) in the FY 2017 Appropriations process to document the prevalence of marijuana impaired driving, outline impairment standards and determine driving impairment detection methods.

Apart from appearing on the WikiLeaks website, that particular issue of Huddle—with the WSWA statement—appears on InboxCart, a website that archives e-newsletters. Interestingly, the WSWA statement does not appear with the text of that issue in the Huddle archive on Politico. It seems to have only appeared in the e-mailed version. Also only in the e-mailed version is the following text before the main subject line: “POLITICO Huddle, presented by Wine & Spirits Wholesalers of America.”

In other words, the WSWA advertisement and sponsorship credit seem to have only appeared in the version sent directly to the in-boxes of Congress members and Beltway insiders.

While the Libertarian convention, RNC and DNC are over, Green Party Convention began on August 4 and ends August 7.

HOUSTON, TX — Julian Assange will speak to Green Party delegates and other members via live video feed on Saturday, August 6, before the party nominates its 2016 national candidates during the Green Party’s Presidential Nominating Convention ( http://www.gp.org/pnc-2016 ). Mr. Assange, founder and editor-in-chief of Wikileaks who has taken refuge in the Embassy of Ecuador in London, will address Greens at the convention at 11:45 a.m. Central Time. He will be interviewed by David Cobb, 2004 Green presidential nominee and co-founder of Move to Amend (http://movetoamend.org ).CONTINUE READING

New York’s attorney general is refusing to comply with a congressional subpoena seeking records about his investigation into whether ExxonMobil misled investors about manmade climate change.

In an escalating political fight over global warming, the chairman of the House Science Committee is pursuing records from state Attorney General Eric Schneiderman and Massachusetts Attorney General Maura Healey, along with nine environmental, scientific and philanthropic organizations.