The GOP is worried about invasions? Time for a history lesson. 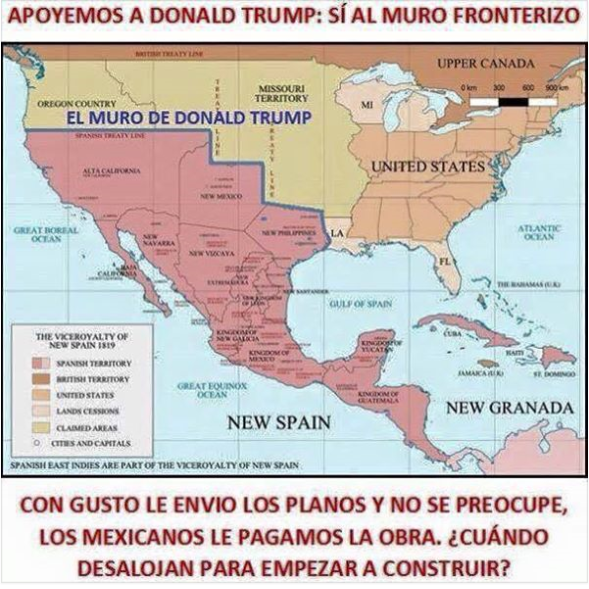 WE SUPPORT DONALD TRUMP: YES TO THE BORDER WALL

WE’LL HAPPILY SEND YOU THE PLANS, AND DON’T WORRY, MEXICO WILL PAY FOR IT. WHEN WILL THE PRE-CONSTRUCTION EVICTIONS START?

The point, of course (to belabor the joke), is that the US-Mexico border that Donald Trump and others treat as inviolable has actually shifted substantially over time — and the very places where Americans today are most liable to imagine an “invasion” of immigrants in fact belonged to Mexico long before they ever belonged to America.

El Muro is translated in English: The Wall. And here is what the US-Mexico border map looked like from 1842-1845:

Memo to Donald: California, Nevada, Utah, Arizona, and parts of Colorado and Texas belong to Mexico. And Alaska was Russian America. lol! Maybe that’s why Sarah Palin stated that she can see Russia from her Alaska home.

The name of a Mississippi businessman whose father killed Emmett Till has emerged in the Panama Papers scandal.

Harvey T. Milam of Ocean Springs, whose father, J.W., shot Till in 1955, appears in the more than 11 million leaked documents obtained by The International Consortium of Investigative Journalists, which show heads of state, criminals and celebrities using secret hideaways in tax havens.

Creditors of a failed insurance company based in the Caribbean island of Nevis, Condor Insurance Ltd., claimed Harvey Milam and others cheated investors by fraudulently transferring the insurer’s assets to other companies. Milam and other defendants settled the case in 2012 without admitting any wrongdoing.

According to the lawsuit filed against Condor Insurance, the company had more than $313 million in assets — most of which disappeared from the company’s coffers, “leaving millions of dollars in claims unpaid.”

Many of the assets were transferred to Condor Guaranty Inc., which Milam reportedly worked to set up under the Bahamian Friendly Society, which apparently offered services to members only.

“We could send out notices of the sale to all creditors etc. and really confuse the heck out of them,” Milam wrote in an Oct. 20, 2006, letter.  “By then the …  system will be up and running, and it will be time to buy a boat.”

The lawsuit also alleged transactions had been improperly backdated so it appeared they took place before a bankruptcy filing.

lol! I thought I heard it all..

In the court of public opinion, the documents provided evidence that wealthy individuals and public officials keep certain financial dealings private. As pointed out in much of the original coverage of the Panama Papers leak, offshore business entities are often legal. Of course, some people used these structures for illegal purposes, like fraud, kleptocracy and tax evasion.

The documents were leaked by a “John Doe” to German newspaperSüddeutsche Zeitung (SZ).

“My life is in danger,” he told reporters in a May 6 statement.  He leaked the documents “simply because I understood enough about their contents to realize the scale of the injustices they described.”

SZ asked the International Consortium of Investigative Journalists (ICIJ) to help analyze the documents due to the sheer volume. 107 media organizations in 80 countries helped analyze the papers for one year before the first news stories were published on April 3, 2016.

wo prominent Bitcoiners, Erik Vorhees and Charlie Shrem, have been tied to the papers.

Vorhees is an influential figure in the digital currency space, having found Satoshi Dice, one of the most popular online gambling games based on the digital currency, as well as ShapeShift, a revolutionary new medium for exchanging digital currency. Born in Colorado, Vorhees later gained Panamanian citizenship, and he now lives in Panama City. Despite an attempt to denounce his US citizenship, the SEC declared him a US citizen in a case relating to his offering of shares in companies without registering them.

Charlie Shrem is another early Bitcoin entrepreneur. As co-founder of BitInstant, Shrem made it easy for people to get bitcoins early in the digital currency’s existence. He also is a founding member of the Bitcoin Foundation. He was sentenced to two years in prison in 2015 for charges relating to money laundering.

Mr. Trump, If You’re Really Being Audited, Show Us Your IRS Letter!

(disclosure: this is a sample IRS audit letter)

In the real world….if only real journalists ask Donald Trump to produce the IRS letter stating that he is being audited….

Earlier this year, Trump released a letter from his attorneys  which says, “your personal tax returns have been under continuous examination by the Internal Revenue Service since 2002, consistent with the IRS’s practice for large and complex businesses.”

Yet, Trump would have received a notification letter from the IRS in the mail, telling him he is under audit.  And, in fact, it is pretty clear on the IRS’s own website:

Should your account be selected for audit, you will be notified in two ways:

In the case of a telephone contact, the IRS will still send a letter confirming the audit. E-mail notification is not used by the IRS.

Memo to journalists: Ask Trump for IRS notification letter that he is being audited. If Donald Trump can demand that (then candidate and now President) Barack Obama show his birth certificate, then show us his IRS letter.