Is Donald Trump serious when he claims that Bill Pryor, with nude pictures at badpuppy.com gay-porn Web site in his background, is fit for SCOTUS?

Those who think Donald Trump is not a serious presidential candidate received new ammunition yesterday with the release of a list of individuals Trump considers possible nominees to the U.S. Supreme Court. Included on the list is an Alabama judge who posed nude during his college days for a series of photographs that wound up at the badpuppy.comgay-pornography Web site in the late ’90s.

What were Pryor’s credentials? Well, he was a passionate member of the Federalist Society, and he launched a state investigation of former Alabama Governor Don Siegelman before the Democrat’s fanny had barely hit the seat in his new office. That state probe led to a federal prosecution that landed Siegelman at Oakdale (LA) Federal Correctional Institution, where he still resides today. It is widely believed that Karl Rove, “Bush’s Brain,” orchestrated the Siegelman prosecution and rewarded Pryor for his key role with a nomination to the 11th Circuit.

Images obtained by Legal Schnauzer show Pryor posing completely nude, staring into the camera and sporting a noticeable erection. We see no indication that the photos were taken surreptitiously, without Pryor’s knowledge. Sources say Pryor was college age when the photos were taken.

Is there doubt about the photographs’ authenticity? Well, a major Republican political figure in Alabama was shown the pictures in the late ’90s and immediately exclaimed, “Holy Cow, That’s Bill Pryor!” A former female political journalist at a Birmingham news outlet was shown the photos and reportedly guffawed and semi-fainted at the same time. Did either of those insiders express any doubt that it was Bill Pryor in the photo? Nope.

I’ve sought to interview Pryor at least three times about the gay-porn photos–and other issues. Each time, he has refused to take questions or even issue a substantive comment. In fact, he simply has not responded. I gave him another opportunity yesterday, via the following e-mail:

subject: Inquiry about Donald Trump, U.S. Supreme Court, and your appearance at badpuppy.com

As I’m sure you know, Donald Trump yesterday mentioned you as a possible nominee to the U.S. Supreme Court. I would like to request an interview or a comment on this topic, especially in light of my fall 2013 reports about nude photos of you that appeared at the badpuppy.com gay pornography Web site.

I have requested interviews on this subject multiple times in the past, and you never have granted one. I repeat that request today and ask that the interview be done in the next 24-48 hours because this is a national, breaking story.

A few questions that quickly come to mind:

* Have you disclosed to the Trump campaign your appearance atbadpuppy.com?

* Did you disclose this information to the U.S. Senate during your confirmation hearings after being nominated to the federal bench?

* Would it be appropriate for you to consider a SCOTUS nomination, given the gay-porn photos in your background–and your public statements indicating you oppose gay rights. Multiple sources say you were confronted about the photographs in roughly 1997, long before your nomination to the federal bench.

* What does the presence of such photographs say about your judgment and your suitability for a position on the federal bench, much less SCOTUS?

* Were you asked about these photographs–or other potentially embarrassing and/or corrupting background information–during the confirmation process for your position on the 11th Circuit Court of Appeals? If so, did you answer truthfully? If you failed to disclose this information, what does that say about your suitability for a role on the federal bench? Did you effectively lie to Congress?

The U.S. Department of Justice announced todaythe indictment of Caleb Andrew Bailey, a Maryland resident, charged with engaging with a minor to produce child pornography, transporting explosives, and illegally possessing a machine gun.Lawnewz.com has confirmed that Bailey is also a Maryland delegate supporting presumptive Republican Presidential nominee Donald Trump. His father is the former vice chair of the Maryland Republican Party.

Postal police had initially discovered a ruptured package containing ammunition and explosives that was addressed to an individual in Wisconsin. Bailey later contacted U.S. Postal customer service and provided the tracking number of the package, letting them know it had not been delivered. Neither Bailey nor the intended recipient had a federal explosives license. Law enforcement officials tried to set up a meeting with Bailey at a post office, but Bailey didn’t show. Officials executed a federal search warrant at Bailey’s home, where they found a machine gun.

In addition to the explosives and weapons charges, the indictment alleges that Bailey “attempted to use and did use a minor to engage in sexually explicit conduct to produce child pornography,” and also possessed child pornography.

A lot of lenders are being targeted for False Claim Act violations of originating and underwriting guidelines for FHA and HUD..

Over the last several years, lenders like Wells Fargo, Franklin American Mortgage, Walter Investment, First Tennessee Bank, Freedom Mortgage andM&T Bank chose to settle with the Department of Justice after being accused of originating and underwriting mortgage loans that did not meet Federal Housing Administration standards.

Now, Guild Mortgage is the next on the DOJ’s hit list, after the government sued the San Diego-based lender, accusing it of violating the False Claims Act, which is the primary law the government uses to prosecute lenders it feels fraudulently represent themselves while doing business with the nation.

In each of those previous cases, the government used the False Claims Act as its primary weapon against the lenders, alleging that each lender violated the Act by ensuring that the mortgages they originated and subsequently verified for FHA mortgage insurance met FHA standards, when in actuality, some number of loans from each lender did not meet the FHA standards. 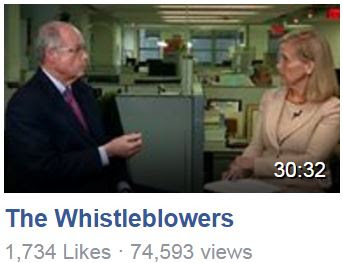 The executive producer of the New York Times for Facebook Live said “one of the highest levels of engagement yet in both comments and emoticons.”
May 11th, I had the distinct pleasure of being part of a new live journalism series, called “The Whistleblowers“, led by Gretchen Morgenson, a Pulitzer Prize winning journalist. It was exciting to be part of this new technology and to be the very first whistleblower to be profiled.
Of course, being first has advantages and disadvantages. The interview itself went well, the technology did not. It was out of synch and consequently watching it was painful, with many viewers saying they had to close their eyes. At the end of the interview the NYT producer over Facebook Live, Louise Story, posted that there were significant technical issues. That the NY Times is at the mercy of Facebook to get it fixed is ironic.
Still, with hardly any audio and out of synch issues, the good news is by the end of the interview 37,000 people were watching, over 695 comments were made during the interview and 534 shares resulted in 1733 likes. Considering how bad the technology was, it was great that people cared enough about the topic to get involved.
Read More
Regards,
Richard
Richard M. Bowen III
richard@richardmbowen.com
www.richardmbowen.com/
214- 604-5492

Tim Leissner, the ex-Goldman Sachs banker in the middle of a $6 billion international embezzlement scandal, accepted hundreds of thousands of dollars from an official linked to a Malaysia wealth fund that is under investigation, according to a report on Wednesday.

Leissner, who was seen strolling carefree around Manhattan last Sunday with his baby and model wife, Kimora Lee Simmons, got the cash from Jasmine Ai Swan Loo, a lawyer formerly with 1Malaysia Development Bhd. (1MDB), the fund from which the $6 billion went missing, according to the Wall Street Journal, which first reported on the matter.

It’s not clear what the connection is between the two. The Justice Department, which is probing the missing cash, has subpoenaed the banker.

As CSP reports, in Operation Stampede, what is being called the largest food-stamp trafficking takedown in history in terms of financial loss, law enforcement agencies filed federal charges last week against 22 Florida store owners or operators, including one convenience-store owner, in connection with schemes to illegally redeem food-stamp benefits for cash. Allegedly, the defendants fraudulently obtained more than $13 million dollars in EBT deposits for transactions in which the stores did not provide food.

According to the indictments, the defendants or their co-conspirators or employees swiped the recipient’s EBT card at a point-of-sale (POS) machine for an inflated amount and paid the recipient, in cash, a reduced percentage of the value of food-stamp benefits charged on the card. The defendants would realize a guaranteed, significant profit from each fraudulent transaction. In most situations, the recipient did not actually receive any food or eligible items in return for their food-stamp benefits.

In addition to the federal indictments, the Office of Statewide Prosecution charged six individuals for their alleged receipt of additional illegal payments during the course of their participation in fraudulent food-stamp schemes.

Law360, New York (May 18, 2016, 11:04 PM ET) — Sen. Ron Wyden, D-Ore., on Wednesday released a proposal aimed at simplifying how derivatives are taxed by requiring ordinary income treatment for all derivative contracts in order to cut down on the use of complicated financial tools to avoid paying taxes.

The Senate Finance Committee ranking member said the discussion draft of the Modernization of Derivatives Tax Act would level the playing field for average taxpayers and lay the groundwork for reform by repealing nine tax code sections and wiping out hundreds of pages of regulations….

Five major banks and four traders were sued on Wednesday in a private U.S. lawsuit claiming they conspired to rig prices worldwide in a more than $9 trillion (£6 trillion) market for bonds issued by government-linked organisations and agencies.

The lawsuit filed in Manhattan federal court by the Boston Retirement System said the collusion dates to at least 2005, was conducted through chatrooms and instant messaging, and caused investors to overpay for bonds they bought or accept low prices for bonds they sold.